By Robin Rongey with Comments by Chuck Vohsen

This was a quote by Chuck after the run, and I find that it is so fitting, not just for the runners, but for the volunteers too. To understand why, I need to start from the beginning and this is how the story goes.

Chuck and I are out running and he says “hey we should put on a trail run event, all of our friends are doing it and it is always fun” I, of course say, “that’s a good idea” he then goes on and explains his idea. A nighttime trail half marathon and have it in January. He was working on a great name for it, and Lori thought of  a great sticker idea to make it come together:  The Shivering Icy Trial Run, SHITR for short.  I laughed, then went into director mode.

We found a date that worked for both of us, and I started calling all my race directors friends looking for free schwag that we could give away. Chuck setup a Facebook event and posted the run information on the blog. We did a pre-run in December and checked out what Chuck thought would be a good mystery event. I have to say here, that we had a couple other runners with us so they knew the answer ahead of time or at least where to find the answer, I won’t name names, Kate, Patrick and Russ so don’t worry no one will know it was any of you.

I also sent out emails to the Metro Tri Club mailing list and from there it got resent to the SLUG’s mailing list. Of course somewhere in the email chain, it got to someone in the Missouri Dept of Conservation and we were asked to get a permit. Lucky for us Patrick was wrong about how the government works and we got the permit without incident.

Patrick wasn’t wrong about how the government works, they almost always suck.  But we got incredibly lucky – the land manager for the wildlife area was exceptional!  He was totally understanding about our ignorance of the permit process and had the permit ready for us in no time.  Thanks  John!

When we decided to do this, we wanted to offer a really crazy run, with hope of seeing snow or ice. Oh and to make the mileage 13.1 we had to add a leg, so a trip to the top of the mound and back down was added. BTW, Chuck thought that up, so everyone blame him, it wasn’t me.

Haha, someone in the group I was running up the stairs with yelled out, “Who’s idea was this?”  I yelled back something like “Mine! Ain’t it great!  This wind is just as amazing as I hoped it would be!”  I never heard a reply but I’m sure it went something like, “You sick bastard”. 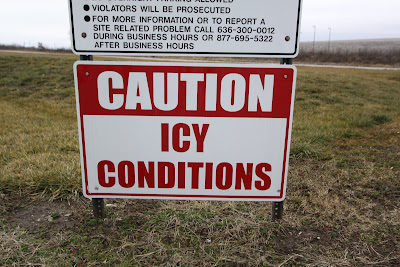 We thought maybe we would get 10-15 people to show up for it, but we quickly saw that we have a bunch of really insane friends and we might get 30 or so runners to come out.
We also thought why not make it something charitable.  Trail runners and adventure racers are just great people, so we thought they would be all up to contribute for a good cause. Chuck updated the blog to let everyone know that contributions to the Asthma and Allergy Foundation of America through our friend Patrick’s, 100+ Project would be appreciated.

The SHITR day finally came but due to a lingering injury, I could not run, so I switched over to full race director mode. Chuck’s wife Lori was also nursing an injury so she would be volunteering with me. Rob, Michelle, Sharon and David were also on hand to help out.

We had everyone sign-in by writing their name on a piece of poster board. We did this so we could make sure everyone made it out of the woods and if they didn’t we could go find their bodies.

I wanted the whole sign-in and timing thing to be minimalist so it wouldn’t spoil the grassroots vibe.  But I also wanted to know how many people came and be able to post some kind of results.  Hopefully we hit a good balance. 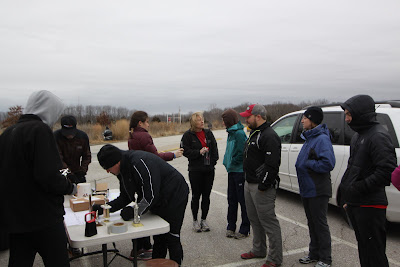 We were also giving out KIND bars, if you have not tried one you should they are the best bars I have ever had and they come in many flavors. I think they give me super human abilities too, I don’t have any scientific evidence to backup this claim, but I really believe it anyway. The people at KIND were very generous in donating these bars for the run. Many of the runners took a bar along on the run so they would have some extra energy when needed. 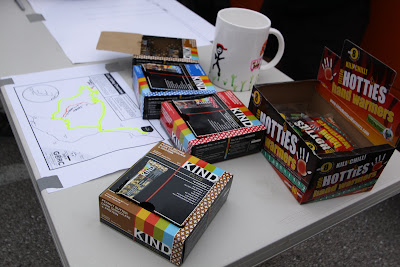 As the runners lined up, the temperature was starting to drop. It had been 60 degrees earlier in the day, but it was 50 at the start of the run. 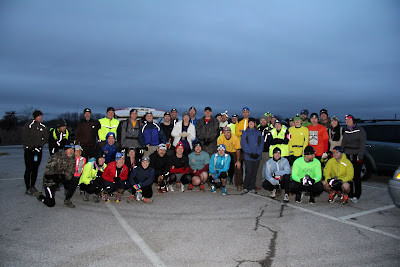 As the runners took off and headed up to the top of the mound, we felt the first rain drop fall.


It felt so good to finally be off and running with such a great group!  All the planning headaches were totally worth it. 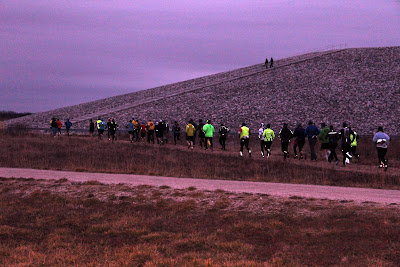 In just minutes runners were headed back down and the darkness started to fall. Head lamps started glowing and soon all we saw was the backs of runners in the distance.

Lori and Michelle had headed down to the creek to get photos, so Rob, Sharon, David and I grabbed umbrellas and rain jackets and headed down the Hamberg to the Lost Valley trail head. There was no real purpose in the trip other than to keep busy while waiting for the runners to finish. It took us about an hour to get back to the van at the finish line and we were soaking wet by the time we got there. 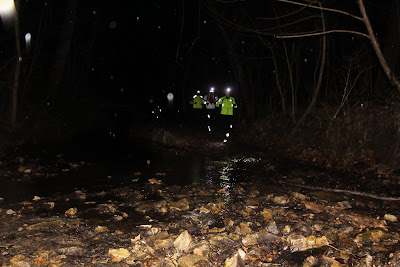 We jumped in the van, turned the heat on full blast and pulled the van up to the finish line, turned on the head lights and waited. Soon we saw headlamps in the distance and at 1:43 Rob Ragnet-Schofield crossed the finish line. 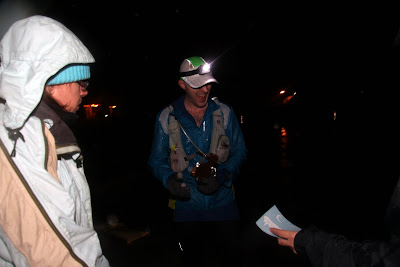 Lori, Michelle, Sharon and I were standing out in the rain cheering and ringing cow bells. We gave Rob the Fastest SHITR award and Lori handed out the first custom made SHITR window sticker. 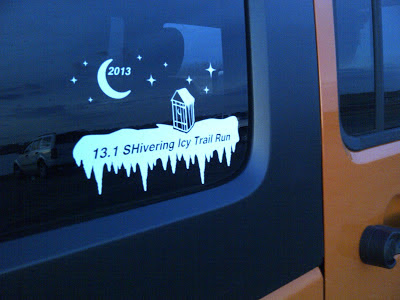 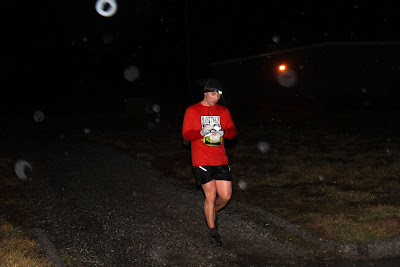 Then Aaron Fanetti crossed the line in 3rd place, but what was even more incredible was that he was wearing a sleeveless shirt and shorts. Oh, so this doesn’t sound so awesome does it. Wait for it… by the time the first finisher crossed the line, the temperature had dropped to 33 degrees and the rain had turned to sleet. He is a little more awesome now isn’t he.

One of the other bits of schwag handed out at the finish line went to Russ D. from the Metro Tri Club.  A great pair of wool compression sleeves from Swiftwick! 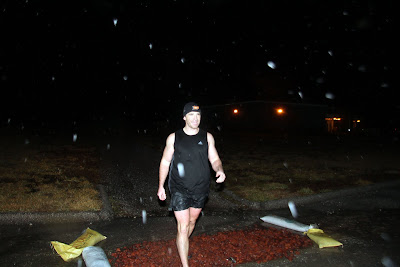 By this time, I had to stop taking photos because my camera kept trying to focus on the sleet and I could get a good photo. It was so cold and we were so wet we started standing under the open hatch of the van trying to suck some of the heat out onto us. I’m not sure how this happened, but while all four of the girls were out in the cold, rain and sleet cheering the finisher in, the boys were in the warm dry van recording finish times. All finish times were taken from the clock in the van, so they were really an estimate, but hey what is a minute or two difference between friends.

At just under two hours we cheered Emily Korsch to a first place finish for the women. She got her custom SHITR sticker and got to pick a prize from our schwag box in the back of the van.
After that things were more of a blur, probably because icicles were hanging off my eye lashes. People came in so cold and wet, but all with smiles and their faces, knowing what an accomplishment it was to finish.

As we stood there cheering, more and more people came across the line, it doesn’t matter if they did the full distance or the short course they are all champions in my eyes.

Standing there seeing the runners shiver and try to change clothes and get warm, made me jealous of what I missed. I know, crazy right, they had crazy stories to tell and I wanted to have stories too.

As it got later in the night, groups headed out to El Azteca for Mexican food and margaritas while we waited for the last finishers to cross the line.

We waited knowing that Christina and Chris and Kerri were still out and worried as the temperature continued to drop and the rain became more ice and less rain, but in the distance we saw head lamps, and soon they crossed the line.

Note: Jim Donahue got the Biggest SHITR award, and I don’t want to discuss why, Carrie Sona got the Messiest SHITR award because she was covered in mud when she finished the race, and Bob “Goldmember” Jenkins got an SPBLD award, but again maybe I don’t want to write about that either, the acronym stood for Shit Pants Bob, you decide what that means.

It was so cool that Russ brought the old bowling trophies to recycle.  They fit the mood of this run so well that we’ve got a guy out scouring thrift stores already for next year.  He’ll come up with the cheapest, campiest, old trophies for whatever awards we can think up.

Chuck and I want to thank all 45 runners for showing up and getting exactly what we promised, a “dark shivering icy trail run”.

We would also like to thank KIND, the Simmons firm, and the Metro Tri Club for donating schwag, the MO Dept of Conservation for use of the conservation area and GORC for building and maintaining the trails.

I’m going to channel Patrick right now and tell you what I think he wants to say to the runners.

I would like to say thank you to everyone who made a donation to the 100+Project! The money you donated will go to help out kids and young adults that suffer from asthma and allergies who are uninsured or underinsured. Your donation will make a difference!

For myself reporting on the run;  I had a great time hanging out at the start talking and goofing off with everyone and probably would not have gotten us started on time if Robin hadn’t been there directing.  It was really cool to start off running with my youngest son, and to run with everyone I met along on the trail.  My favorite part of the night had to be hanging out drinking and eating at El Azteca.  There were times I was laughing so hard I could’ve fallen out of my chair.  Other than that I’m going to leave all the details of the dark, cold, rain and sleet to other runners who are far better writers than I am.  Go check out these race reports, they are really inspiring!