So what do you do for fun when you’re training for an Ironman, well you compete in a mountain bike race. I mean, why not, you have been spending all your time on a road bike and running and swimming, training for the IM and of course you haven’t been on your mountain bike in two months, so it’s the smart thing to do… right?

Ok, it might not be the smart thing to do, but it is the fun thing to do, plus it’s what my mind needed to break up the monotony of all the long IM training.

I mean, that is what Chuck told me when he talked me into doing it. If you haven’t noticed, in all my post when I get talked into something, it’s almost always Chuck talking me into it. He is really a bad influence on me. 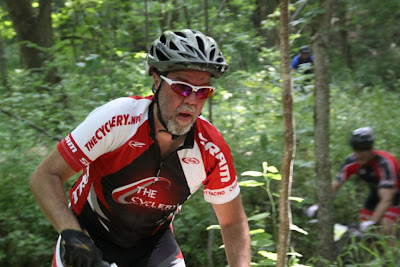 When I arrived at the park, Chuck and Lori had already pitched the canopy on the best corner of the course, so we had an awesome pit area, so awesome that many of our Team Cyclery teammates used it for their pit also. 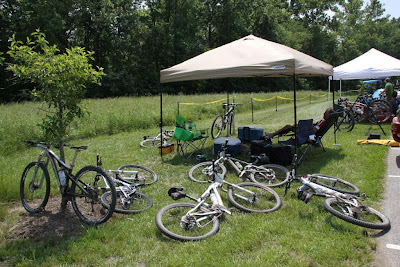 I was not in a good mood, I had a headache, stupid pollen, and I think I was still tired from staying up all night at the Relay for Life on Friday/Saturday. At one point while driving to the park, I thought about turning around, but I didn’t, I committed so I would be there.

Chuck and I registered for the race and Lori got her camera ready to take some awesome race photos. I knew a few of Team Cyclery would be there, but oh my gosh, I think we had so many teammates on hand that we dominated the field. We put our numbers on our bikes strategically placed our coolers and were ready to ride. 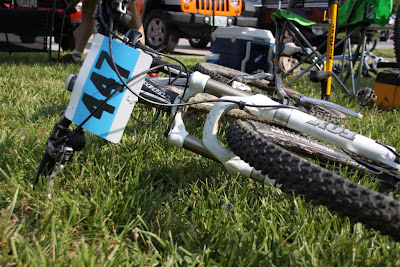 We were standing at the starting line in a sea of red Cyclery jerseys, most of which were in the Marathon division. Once again, I felt like this was a mistake, I mean, I hadn’t been on my mountain bike in months, I kept chanting in my head, just ride, it will be a good workout. 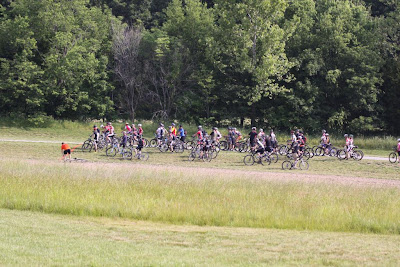 The Race took off fast, it seemed way faster than the previous year, the course was super dry, which makes it fast, but also treacherous. Since it was so dry the gravel and dirt was very loose, which threw me into a fish tail many times. 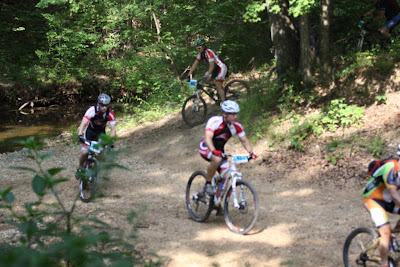 I made it through lap 1 without incident, and when I looked at my time, it was over a minute faster than my 1st lap the previous year. I was surprised and even more surprised that my headache was starting to subside. I headed out for the second lap without a pit stop, I still had enough fluids to make another lap. I had a girl tailing me for the entire lap, so we chatted a little and of course it made me stay fast, as I didn’t want to get passed. She was riding cat 3, so after that lap she dropped off. I blew through the pit area without stopping, thinking I could make a 3rd lap before I needed to stop. I started to slow down, my third lap came in 1:50 slower than my first two laps. I dropped off at our pit area in the feed zone after the 3rd lap and Lori refilled my water bottle while I ate a HS waffle. I really didn’t have the stomach to eat, but forced myself too, I’m glad I did though, I know it helped. 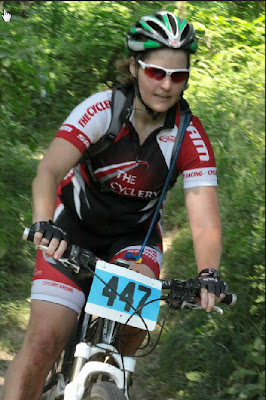 I was really glad to get back into the woods quickly, it was really warming up and the sun was just beating down out in the open. I picked up the pace on my 4th lab, riding faster than my third, so I knew the Honey Stinger waffle had kicked in. Riding out of the feed zone to start the 5th lap, I was thinking to my self and I said out loud “ I paid for this too”, the spectators sitting along the feed zone started laughing. I started to slow down a bit on the 5th lap, but I was at the point where I was just thinking, have fun, it’s almost over. I really do love the course with all the winding turns. 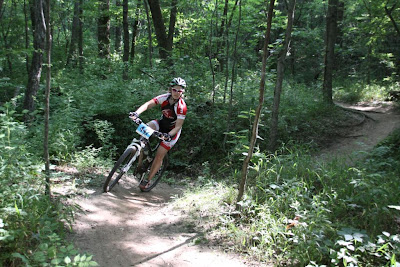 I finished the 5th lap, but had added two minutes to my lap time, I thought it best to stop in the pit again and grab another HS waffle, it was even harder to get it down this time, I ate about half a waffle and took off. Now I was in new territory, the previous year, I only finished 5 laps and here I was on my 6th lap and I couldn’t figure it out, I was sure I was in worse shape than the previous year and I had also put on weight while nursing an injury over the winter, so I was carrying a lot more girth through the course, but was still way ahead of my course PR. I tried to ride fast, knowing it was my last lap, but it ended up being my slowest lap, but still faster than the previous year. I rolled through the finish line, thinking only of that lawn chair under the tent. 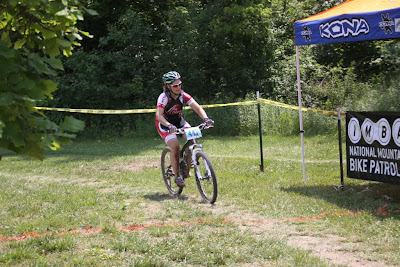 I rolled into our pit area and fell into the lawn chair. 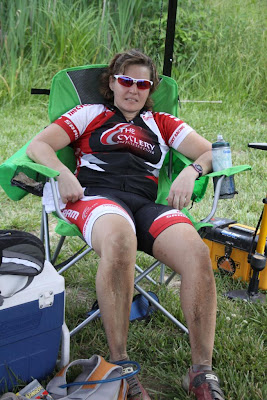 I pulled off my shoes and socks to find that I either had a really good suntan or I drug about 2 pounds of dirt off the course with me. I have enough weight to carry right now, I didn’t need all that extra dirt dragging me down. 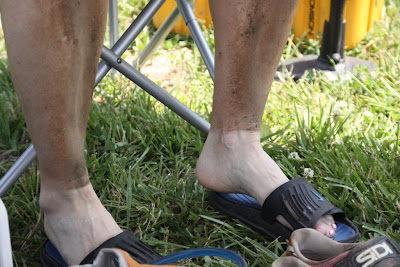 I sat in the chair and waited for chuck to roll through the feed zone on his way to the finish. He did 7 laps and only finished about 10 minutes behind me, so he really had a great day. 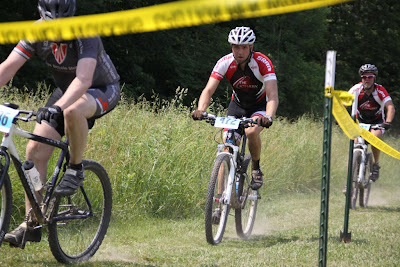 Chuck flew through the finish then came rolling into the pit, like me, he just wanted to get his shoes off too. 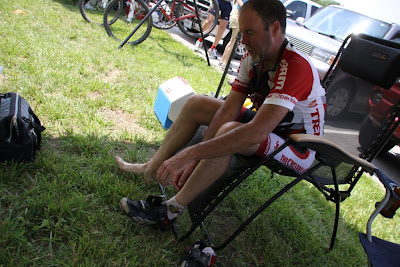 After resting a few minutes, we got cleaned up and headed to the awards, I was called for second place. 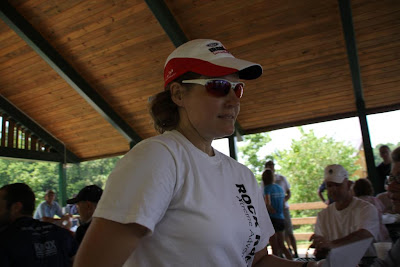 Mary Piper, a very cool competitor was called for 1st, she is so fast, I would love to ride as fast as she does. 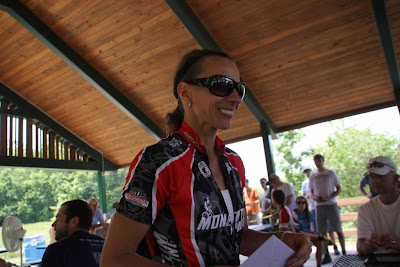 Andy Gibbs was called for an award, I think he was 3rd. 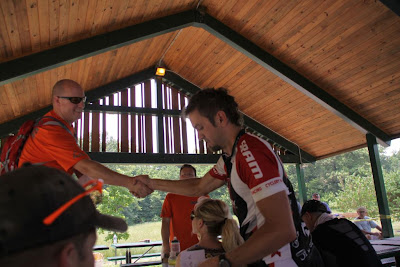 It was really fun seeing all our friends out having a great time, even some of our Adventure race friends were on hand. It was a perfect day and one I can’t believe I almost didn’t make because of some stupid little headache. I should have known the best medicine is always to go outside and play.
1 comment:

I’m giving up on my previous favorite mtn bike tires. They were Kenda Slant Six’s mounted tubeless front and rear which I reviewed here: SS review..  It’s not that they were all that bad, I’m just convinced there is something better. 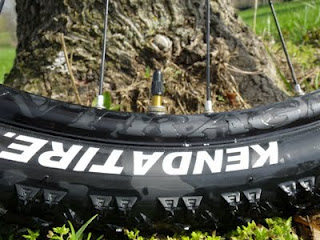 If you read my race report from Carnage at the Creek here: CAC .  You already know I cut the sidewall of my front tire on some rocky singletrack.  I was able to boot the tire with a Gu pack, stuff it with a tube, and finish the race. 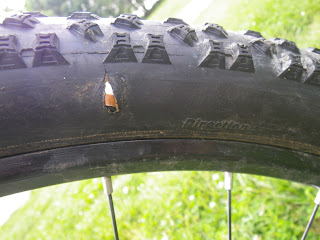 I have a full year of riding on this tire set, and they are showing some significant wear maybe I expect too much?).  The rear tire is the worst and definitely needs to be replaced.  I have been sliding around and loosing traction in all terrains recently, but after a recent wet gravel ride had me squirming all over I decided it was time to change the rear. 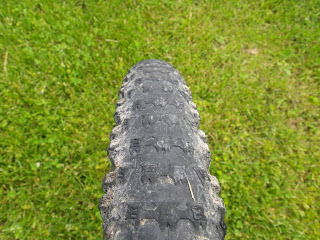 They were my first set of tubeless tires, so I’ve been wondering how much of the improvement I noted while first riding them was because of the change to tubeless and how much was the tire design.  Another thing that bugged me, but never turned into an issue was the fact that Kenda would not warranty tires that had been used with sealants.  wtf?  Everyone rides tubeless with sealant.  What a cop-out.
Late last fall I built up a Niner Air 9 for Jacob (ROCK Racing’s youngest member) and used Rocket Ron 29er tires on it.  He has been training and racing on them ever since and they have given flawless performance.    He even has an AG win at Tracks-n-Treads offroad biathlon on them. 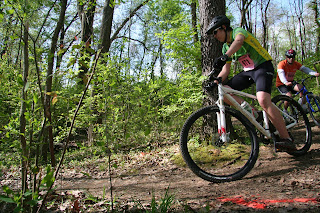 So seeing the success he has had, I was predisposed to using the same tires on my Superfly.  I like the big square lugs with tight spacing on the Racing Ralph’s.  It is available for 29er wheels and in several different widths.   It has smaller tighter lugs down the center to roll smoother and faster, with larger further spaced lugs on the edges for grip during turns. 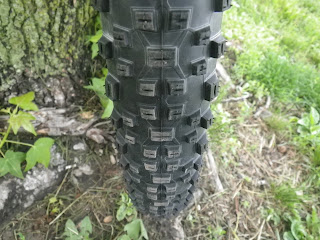 The Schwalbe tires are also available with Snakeskin sidewalls.  I definitely wanted more protection after cutting that sidewall in the race.  (Now that I think about it, I also cut a sidewall on a Maxxis Ignitor at the Castlewood 8hr).  From Schwalbe’s website:  “The Snakeskin protection is a layer of abrasion resistant fabric mesh that's embedded into the outer layer of the casing on the sidewall. It adds yet another facet of durability, making these tires prime for tough terrain.”   Sounds like just what I need. 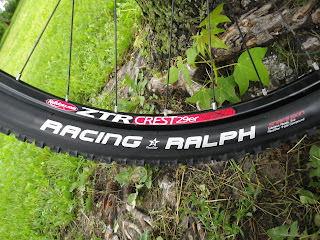 Another feature I like that most tire mfg’s do on their high-end tires is multiple rubber compounds in different tire locations.  Schwalbe calls theirs the Pacestar Triple Compound.  And their description of it is “rubber to optimize the tire's performance wherever possible with regards to grip, durability, and rolling resistance…. cornering is outstanding thanks in part to the soft rubber compound”

So that’s it.  I decided on the Racing Ralph’s with SnakeSkin, TL-Ready, Folding, 29 x 2.25in.
I mounted them on my Stan’s ZTR Crest wheels.  They have been the easiest tires I’ve set up tubeless to date.  I used my compressor to seat the beads, but I bet it could be done with a hand pump.  I used two cups of Stan’s sealant in each one.  They sealed instantly and I haven’t had to do any of the old PITA shake-to-seal method or leaving them on a bucket each night for a week refilling with air each morning.  Seriously, I just put them on and they were ready to go.  Simple.  Awesome.

Now I have to get some ride time on these new tires and let you know what I think.
No comments: