Instead of a race report, I decided to just show you a bit of the race, from the view of my helmet cam.

And here's a few pics of the Trek bikes that carried us through the day: 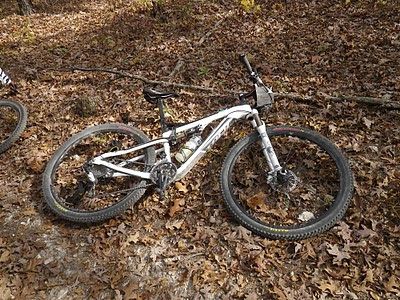 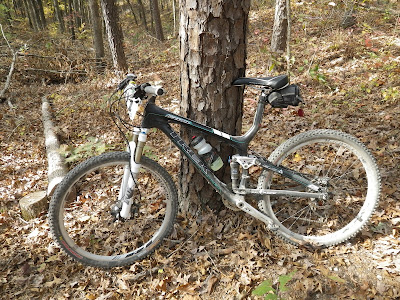 Rock Racing teammates Chuck and Robin were interviewed by Show Me St Louis. The interview aired on October 15th Program. Watch the video below.

Last week we had 10 minutes of fame from the newspaper story, this week was two minutes of fame, but TV fame is way cooler than newspaper fame. ROCK Racing was interviewed by Show Me St Louis. It seemed like it took an hour to do all the video, I bet I re-opened the car door 6 times for them. Too bad they didn't put in more of the mountain biking. They even edited the good stuff we said about Honey Stinger and Trek. But in the end it was pretty fun.

ROCK Racing was interviewed for a story in the St Louis Suburban Journal. We waited a couple of days for the story to come out and were suprised to see the headline and Robins picture on the front page! The second half of the story was on page 12 where there was almost 1/2 of the page used up on a giant picture of us at the Urban Assault starting line.

Check out the story here: http://suburbanjournals.stltoday.com/articles/2010/10/04/madison/news/1006cvj-hobby.txt
No comments:

Four of us met early on Saturday for a day of paddle training. Started off cool and foggy when we put in at the Hwy Y bridge over the Cuivre River. It warmed up and got sunny by the time we made it to the Mississippi. Found a few big cruiser boats and even a barge threw up some big wakes to play in. We paddled down past the Grafton Ferry and into Dardenne Creek for a pickup at the Hwy B bridge. We ended up paddling almost 5 hrs and covered just over 18 miles. The kayaks, paddles and gear all worked great, no one had any problems. One of our group was even kind enough to demonstrate how NOT to reenter the kayak after we pulled in for a short break.

The team took a break at the end of August/beginning of Sept to get in some individual events.  Robin went to Louisville to compete in IM Louisville.  You can read her report about racing 140 miles with a broken foot in 107 degree heat on the mountain girl blog.  And I went to Branson, MO for the inaugural Branson 70.3 IM.  I'm not writing a big ol report on this one, just didn't end up with any big stories to tell.  Don't get me wrong though, it was a great race, the city of Branson and the IM organization went all out, a four-lane highway was closed for the bike, and the beach, lake and transition areas couldn't have been better.  It just didn't have that tough, gritty, risky, feeling of an Adventure Race.

Set up my two transition areas the afternoon before the race, the bike area was HUGE 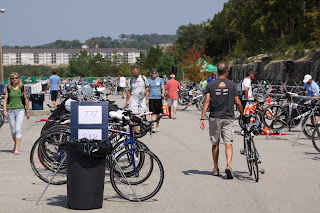 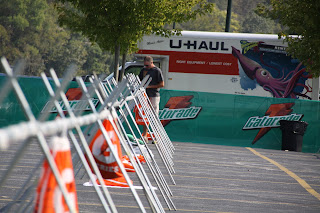 The night before the race Branson hosted a welcome concert on the landing.  We watched while anchored on the lake until the fog got to thick to see anything. 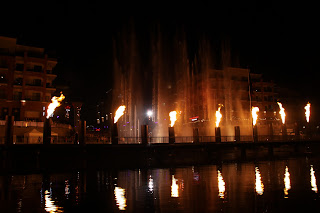 I was not ready for the total chaos that the bike transition turned into on the morning of the race.  Luckily I had everything set up the day before, so all I had to do was make sure nothing got moved overnight. 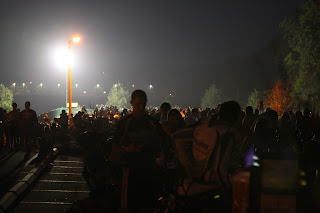 Then it was time to start, I had been fearing this swim for months and it was for nothing.  I went into the water and found this perfect rythum.  I was at the far turn-around before I knew it. 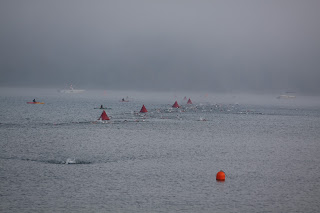 It had gotten kind of foggy and hard to see to the next bouy from the water. 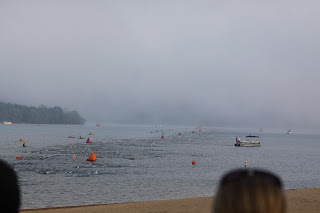 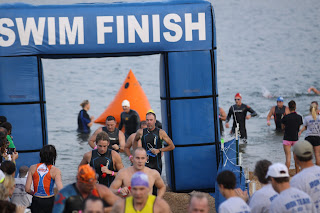 It started getting warmer out on the bike.  The hills in Branson were not especially steep, but they sure were long.  This pic was on the four-lane highway that the city had completely closed to traffic for the race.  The aid stations were all stocked with power-somethings.  Good thing I had Honey Stingers in my jersey. 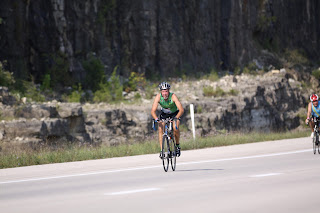 By the time I got to the run it was hot.  It was in downtown Branson and the buildings blocked any breeze there might have been.  Luckily the aid stations were well stocked with ice, so I filled my pocket at every chance. 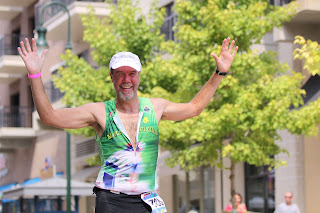 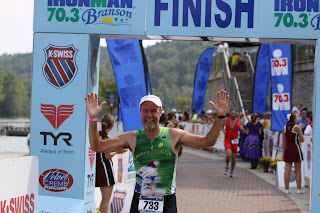