We decided to take a family vacation to Colorado this year.   We found a great out-of-the-way cabin to rent in Placer Valley.   It was just south of the Continental Divide and Hoosier Pass between Breckenridge and Alma.  The valley’s 10000ft altitude would be a great break from the Midwest heat wave (valley temps were 38 low – 73 high).  We planned to do it all.  Mtn bike, trail run, hike, Jeep trails, trout fishing, horseback riding, white water rafting, eating, exploring, sampling local beers, gold panning, and climbing as many 14ers as we could get in.

Somewhere during the vacation planning stages I ran across a flyer for a trail race in Leadville, CO.  Leadville is the home of several famous races, and the Leadville 100 may be the most famous (infamous?) mtn bike race of them all.  So, on a whim, I registered for the Leadville Heavy Half, a 15.5 mile race up Mosquito Pass.
So after some VERY cool vacation adventures which could make up several blog posts on their own, race day finally came.  With a less busy week or better planning I would not have climbed the 14148 ft Mount Democrat the day before a race, but this was the way it worked out.  I’d be racing on tired legs.
http://www.14ers.com/routemain.php?route=demo1&peak=Mt.+Democrat
Start time was 9am and we left the Placer Valley cabin about 6:30 making sure there was enough time to drive around to Leadville. No direct driving through the mountains, we had to go way North through Frisco to get there. Driving into Leadville you see its mining heritage all around you.

There is a great story about how the town suffered a devastating economic collapse when the mines closed down.  One of the miners, Ken Chlouber, saved the town by coming up with the Leadville race series and putting the town squarely on the map of every endurance racer.  Link to the GREAT Leadville story:
Dr. Bob Woodward wasn't drunk. "You cannot let people run a hundred miles at this altitude," he railed. "You're going to kill them."
"Good!" Ken shot back. "At least that'll make us famous."

Check-in went fast which was a good thing cause I was dying to get to a porta-potty.  After that I made my way to the start line while Lori and the boys parked the Adventure Jeep.   The start line was on pavement in the center of town.  There was a festival atmosphere with lots of bystanders and racers making last minute gear adjustments and bathroom breaks.

I started second guessing my long sleeve Icebreaker shirt but it was too late to do anything about it now.  So I took a few minutes to look around at the other racers.  A few runners stood out in the crowd:  A barefoot guy was giving advice to other runners about how to begin barefoot running.  A military guy in camo fatigues, combat boots, and a giant rucksack stood near the back, lots of runners with trekking poles, and loads of runners with small hydration packs.

The start was cool.  A guy walked out in front of the start/finish line with a shotgun, aimed up, and fire.  The race was on.

From the VERY first step we were going up-hill.  Every race has its rabbits that shoot out at the start, but this one had the biggest percentage of careful starters I’ve ever seen.  Most of the group went out on a slow jog, with a large group of walkers tailing behind.  I took this as a sign that this was going to be a very difficult run.  Using the more experienced people around me as a guide, I promptly decided to stick with a slow jog the rest of the way out of town.  I was racing in LEADVILLE !  YES!

Five days earlier when we first arrived at the vacation cabin I carried the first duffel bag from the Adventure Jeep.  The short set of stairs into our cabin almost defeated me and I was gasping by the top of them.  That put some fear into me about this race, altitude was worse than I remembered from the 2009 Colorado Relay. 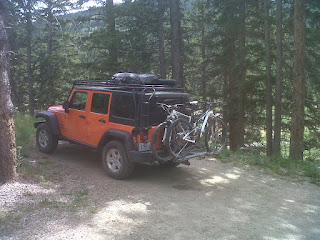 Luckily during the rest of the week I got in several runs and rides that proved I was becoming more acclimated by the day.  It appeared that as long as I stayed in my ‘easy’ zone, I could still run and even manage some climbs.  I convinced myself that the race time didn’t matter, it was a vacation race, just for fun.

The paved run through town quickly turned to gravel (still climbing) and went past a couple of abandoned mines.  Rusty sheet metal roofs, dried ancient looking timbers, and trees growing among the empty buildings.  The group of runners was thinning out as everyone found their paces.  I took some walk breaks on the long gravel climb, and talked to a fellow racer who had done this race before.  His advice was to take advantage of the shade wherever you could because “This sun will cook the skin off of you”.  Great!  I didn’t even bring sunscreen.   I took his advice and tried to get in as much shade from the trees as I could.  The day was warming up quickly. 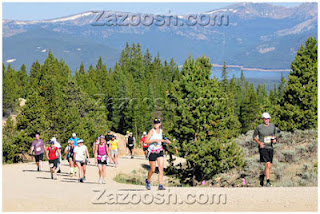 The road narrowed as we made it to the first aid station.  I grabbed a small handful of salty pretzels and a cup of Gatorade.

We got a reprieve from climbing between the first and second aid station.  The trail leveled out and made a shallow descent into a valley.   I started running again over this section, but could only manage a slow jog.  The altitude, previous climb, and (now) much warmer temps were taking their toll.  I could hear the second aid station before I could see it.  Everyone in Leadville must have showed up.  Bells ringing, people yelling, lots of signs and spectators on both sides of the trail.  I grabbed another cup of Gatorade and a gel pack.  It was Espresso Gu.  That sounded terrible but I needed something.  I squeezed it down without tasting it, thank God.

I jogged out of the aid station and turned onto the Mosquito Pass trail.  I passed two runners squatting in a creek dunking hats and bandanas in the cold water.  It looked like a pretty good idea, but I wasn’t that hot yet.  About 100 yards later I was wishing I had done it.

Mosquito Pass is the highest open mountain pass in the United States.  The top is 13,185 feet above sea level. This is higher than many of the mountain peaks in Colorado and only 815 feet away from being on par with some of the 14,000 foot peaks that people climb within the state.  I never saw a Mosquito during the race, so I googled to find out how the pass got its name:
There once was a town partway up the pass called Mosquito. It was named in a strange way. It seems the miners could not decide on a name so they closed the ledger and went home to think about it. When they next met, the secretary opened the ledger and found a smashed mosquito in the blank spot they had left for the town’s name. They all agreed they should call the town Mosquito.

The trail immediately got rockier and steeper, I had to start taking walk breaks again.  By the time I got above tree-line, I was done running altogether. 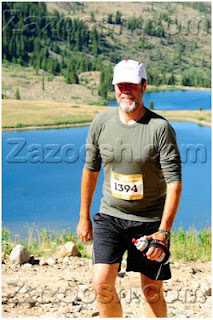 The good part is all the other  racers were also walking now.  A rare runner would come by,  and I would try to say ‘nice job’ or ‘looking good’.  But mostly I was walking and gasping.  Runners were also coming back down the pass at this time.  The course was an out-n-back so it was expected.  I did my best (and succeeded, I think) in getting out of the way and yielding the best line through the rocky trail for the fast guys coming down.  They were there to win or PR.  I was just there for vacation fun.  The last couple of switchbacks were squarely in the Death March zone.  Just keep going, don’t stop, almost there, you’ve been tougher places before….lots of internal dialogue.

I was so relieved when the last switchback turned into the top of the pass.  I had planned a quick turn around, but it stretched into a couple of minutes as I peed off the top of the world, re-filled my water bottle, ate a fig newton and handful of salty pretzals and a final cup of Gatorade.  The view was AMAZING!   I took a long look around to make sure I could remember how majestic this was before heading back down.
There was this tombstone on top and also this crazy stagecoach sign: 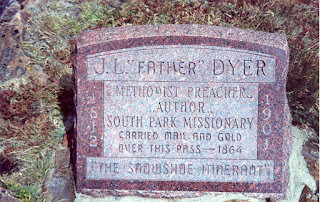 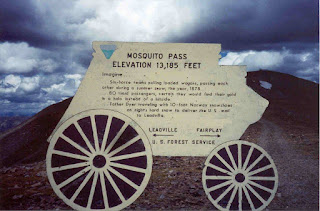 Before I got down through the first set of switchbacks I saw the barefoot guy working his way up through the rocks.  I could tell by the way he was moving that he was footsore, but still getting it done.  I also saw the guy in military gear with the giant rucksack.  He passed me coming down, moving so fast I can’t fathom how he didn’t break a leg or roll an ankle in those big loose rocks. 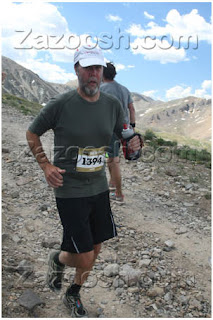 I stayed in a slow and careful jog.  I picked careful lines through the rocks and other runners still coming up the whole way back to that crowded aid station.  The crown was still there cheering like mad.  I ate another Gu pack and cup of Gatorade.  I was dreading the earlier downhill between the aid stations that would now be an uphill.  I ran up to it, then broke, and walked the entire thing.  Luckily this was about where the trees started again , so I was able to pick out some bits of shade to run in.  I could feel sunburn starting on my neck and face. (A day later I also discovered my lips were also burned bad enough to get blisters on them.)

After the final aid station it was downhill all the way to the finish.  I started running and told myself I wasn’t going to walk again until after the finish.  There were only two runners near me now, and it looked like they had made the same decision.  So we ran.

The gravel turned to pavement and before long I was looking down the long street into the center of town.  A little boy in a front yard called out, ”Almost there!”
I ran hard with everything I had.  No particular reason why.  I knew my time was terrible, but you just can’t finish a race with anything left.  I was so tired by then it probably looked like an agonizing shuffle to onlookers.  I could hear the announcer call out the name and city of the girl in front of me, and it was only a few seconds later I heard: “Chuck Vohsen, from O’Fallon, MO!”

The finish was cool. They pulled a ribbon across the finish line for everyone to run through, then a volunteer hung medal around my neck, while another volunteer untangled the timing chip from my shoelaces.

I was soaking up the post-race atmosphere when I heard the announcer saying something about free beer.  I asked around and found the free beer tent.   Each racer got two, so I picked out two I’ve never tried before.   A 'Dales Pale Ale' and an 'Old Chubb'.  Haha, gotta love the name, and it’s 8% ALC.  Both are brewed in CO.

I found the girl with the sign I had seen on the way up and HAD to get a picture with her:

What a great day.  Now I want to do more of the Leadville Race Series.
http://www.leadvilleraceseries.com/page/show/309878-home

Side note:  After I returned home and got around to checking the race results,  I found something interesting.  I raced with Ken Chlouber!  None other than the inventor of the Leadville race series, and savior of the town.  Ken is 73 yrs old and still knocking out tough trail races.  Awesome!