If you have been following my blog, you know that I purchased a CX bike this year, really to use as a gravel bike, but I figured since I had it, I may as well do a few CX races.  I “competed”, if you can call it that, in a CX race last year, but I rode it on my mountain bike.  It was probably the hardest I have ever worked in a bike race.  I was in oxygen debt the entire race and when I got off the bike I almost fell over my legs were so shaky.

After that experience, you are probably wondering why I wanted to try it again.  I wanted to see if it was just as hard on a CX bike, it was, but it was a different kind of hard.  It was less of me just trying to muscle the bike through the course and more of me trying to go faster.  Riding a CX bike on the course is WAY easier than a mountain bike.  I was still in oxygen debt by the end, but it was because I was pushing myself, not because it took everything I had to muscle a mountain bike through the course.

I really suck at getting over the barriers, so if I plan to continue racing CX I need to work on that.  I roll up to the barrier and am off the bike while it’s rolling, but when I get back on, I’m at a complete stop.  I need to learn how to jump back on the bike.  I would say my dismounts are average, but my remounts, well let’s just say there is a lot of room for improvement.

I made a rookie mistake of course.  I knew the race was 45 minutes and the ref told us it would be 6 laps, but it ended up being 5 laps.  So this is how it happened, I was in the back 3rd of the field and coming around on the 5th lap and there were two girls right in front of me, I felt pretty good, so I thought I would just sit behind them and on the next (6th) lap, I would wait until about half way through the lap then jump and pass them.  So I was just taking it easy keeping in a close range as I rolled through the lap only to hear the ref say, you’re done.  I was like “what, I’m done, we have another lap”.  No one was complaining about having one less lap, but that just through my strategy in the trash.  I mean really it didn’t matter, it would have put me 8th instead of 10th and neither of these were in the money, but it was just the fact that I really thought I could get the two girls in front of me. Oh well, lesson learned, I won’t wait next race, I will go when I have the chance no matter what lap I’m on.

It was a lot of fun and I got to ride with Kate, Kristen, and Ann on a perfect day in September.  I will do another CX race this year and then decide if it’s something I will continue doing.  I mean I have the bike, all I had to do was swap my gravel tires for CX tires and I was ready to go. Oh and get this, I did the tire swap by myself with no help, I didn’t even have to run into the bike shop for an expert to fix what I messed up.
No comments:

The Time has Come for National Adventure Day

I've written before about how all my best ideas come during a trail run.  Well, this story is no exception to that written in stone rule.

A couple of weeks ago I had discovered that the coming Saturday was going to be National Bacon Day. I googled it and read a news story about National Bacon Day.  It was the brainchild of three students, who just loved bacon.  They just up and decided to create a new holiday in honor of the fried pork strips we all love.  Apparently it took of like mad and went viral on social media.

A holiday for bacon!  Thats freaking awesome and has to be celebrated.  So I bought a pound of the best thick sliced smoked plastic package of pork goodness I could find.  Lori cooked an entire pound of the bacon for Saturday breakfast, smashed it between some toast and, it was sooo good. 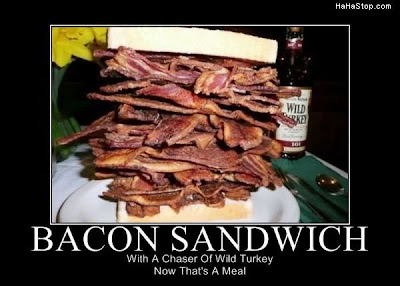 So a few days later I found myself running the Lewis and Clark trail in Weldon Spring Wildlife Area.  The trail has some steep hills and some pretty rocky technical sections, so you can't really get too zoned out without coming to a face-first crashing halt.  Somewhere between reminiscing about the previous weekends adventure race, that bacon sandwich, and watching the trail.  An idea crept into my head.

I couldn't stop chasing the thread of that foggy thought for the rest of the run.  National Adventure Day!

I contacted some of my adventuring co-conspirators from Team Virtus , the 100+ Project, Trail and Error, and SuperKate.  They really helped put the idea together and got this project going on the right track.

We decided that National Adventure Day should take place the weekend proceeding Columbus Day, which is always the second Monday of October.

We also talked about a good acronym for the day.  Maybe the Great Outdoor National Adventure Day (GONAD - or just NAD for short).  And since one day probably wouldn't be enough we decided to make it both weekend days, causing another acronym change (NADs).

So start planning your NADs now, its coming up October 12 and 13 this year!  And go LIKE the National Adventure Day page on Facebook!