I decided months ago that this was the year to try the 36hr version of the Berryman.  It turned out to be on the same weekend that Robin had committed to being the Director for the Miles for Meso 5K in Alton, IL.  Click here for her blog report.  So that left me looking for a teammate, fortunately a friend suggested I get in touch with Megan.  I sent her an email and we met on a group run at Lost Valley, she was obviously an adventurer at heart and agreed to do the Berryman race with me.  We trained together a couple of times over the summer, and raced together at Conquer Castlewood. 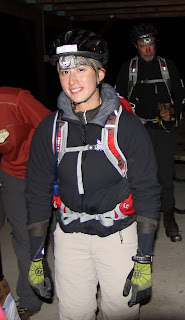 As race day got closer Jason sent out a couple of email and FB posts looking for volunteers.  Lori and my boys decided they would volunteer at the race and would even take one of the remote overnight camping transition spots.  She has some great stories to tell about the weekend.  I'm going to try and talk her into doing a guest blog post about it.
The drive to the race was in a VERY full adventure van.  All of my usual race gear and all the camping gear for Lori and the boys.  When the van was fully packed I hooked up the bike rack only to find out that my Superfly doesn't fit on the 90 year old POS rack.  I gotta get one of the new KUAT racks.  So everything had to be unloaded then repacked all around the bike.
Finally made it to BASS and set up camp and went to the campground office for the pre-race meal, pasta, salad, chicken, and awesome brownies for desert. 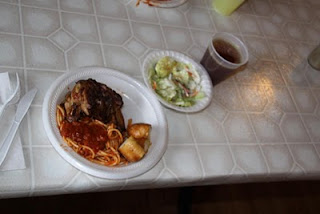 I went over to racer check-in and found out that my friend Lo (an awesome mtn biker) was volunteering for the race as well.  The pre-race meeting started right on time.  We walked down to it a few minutes early and got a good seat.  They did a cool demonstration with some Lights and Motions lights, they turned off all the pavilion lighting and held up a checkpoint flag in the dark then someone turned on a headlamp to let us see it.  Jason gave us all the race info and an 11pm start time. The volunteers passed out maps and clue sheets.

The terrain feature that gives me the hardest times when navigating is always reentrants.  So "We are going to die out there" was in the front of my mind when I looked at the cluesheet: 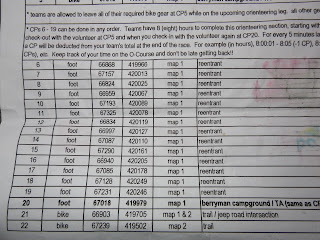 Megan and I worked on a picnic table in lantern light, quickly plotting the 37 checkpoints from the cluesheet onto the map, and then used our usual highlighter method to draw in some route choices.  There were several places on the plan where we kind of took our best guess and decided we would make the final decision during the race depending on how we felt and what the actual terrain looked like when we got there.
Since I had such a bad time with blisters at Thunder Rolls I was determined not to go through that again.  I had done some research and found out that a lot of adventubre racers use Hydropel as a lubricant and water-proofer.  I was testing it this race.  I pulled the tube out of the first aid kit and lubed my feet up and put on my socks and shoes then headed to the start line. 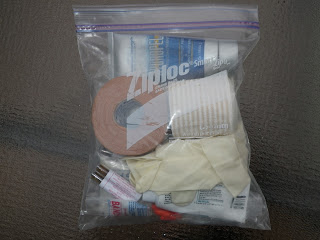 The race started right on time with the national anthem.  The first leg of the race was mtn biking.  We started off using the same start that the berryman epic mtn bike race uses. 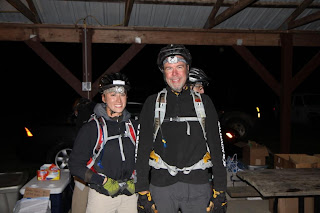 If you've been to the Epic you know that means hills.  The group took off at a fast pace, Megan and I held back, sticking with our pre-race plan of not going out to hard and burning out early.  So we were one of the last teams into checkpoint 1. 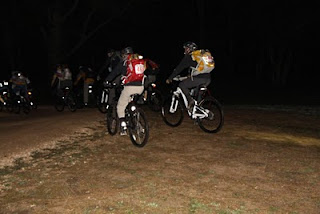 During the ride to CP2 the rain started.  It was a downpour.  We rode into clearing at the bottom of a jeep trail and found a big group of 8 or 10 teams trying to sort out the location of CP2.  They had decided that we were all on the wrong jeep trail and rode back up the hill leaving Megan and me by ourselves.  Two years ago, or even a year ago I would have ridden back with them, but I think I’ve finally learned to trust myself and not the crowd.  We rode out the backside of the clearing and found the CP a few minutes further down the trail.
There was some controversy over the location of CP3 at the pre-race meeting.  But when we rode up to the pond, I shined my bike lights out over the water and the reflector on the checkpoint flashed at us.  We ran around the pond and punched it.
Another bike CP and we rode into the first transition area at the Berryman Campground where we got a shock.  We received a 2hr time penalty for riding in the road instead of the trail.  It was my fault, I never read the clue sheet.  I was just glad it was only a time penalty, and I knew this would be a race for CP’s.
Megan pulled out a field stripped MRE (I learned some new military lingo this weekend too) while I refolded our maps in the waterproof case.  She offered some to me, it was beef stew.  I’m not very particular when it comes to food, especially in a long race.  But this stuff was bad.  I ate another two or three scoops anyway.  Calories are calories.
The next section was an 8hr trekking/orienteering leg for CP6 trough CP20.  It was still dark but the rain had stopped.  Every CP on this leg was in a reentrant.  I had some navigational difficulties (800 damn reentrants per kilometer) in this area and only found 4 of the CP’s before we decided to head back to the TA.  There were some significant penalties for coming in late. 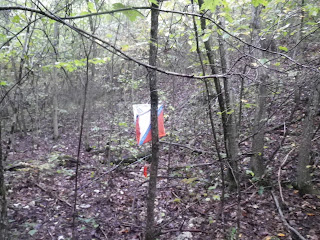 We rode out of the transition on the Ozark Trail, crossed highway 8 and worked our way to the Hazel Creek campground picking up a few more CP’s along the way.
Hazel Creek is the campground Lori and my boys were volunteering at, so we rested and took some time to see how their adventure was going. 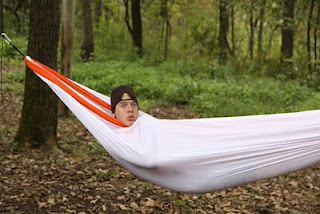 We ate a little more.  I finished off my PB&J sandwiches and an Ensure while Megan pulled out another MRE.  Chicken Noodle.  Way better than the beef stew!  We had a six hour time limit on this leg.  My goal was to get out of there and be on the bikes before dark.  We found the checkpoints that we could and rode away to Huzzah Slab. 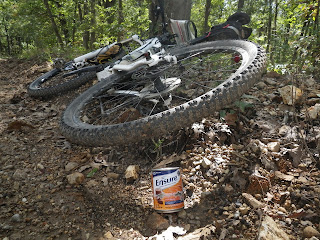 It got dark before we reached the slab, which was a low water bridge and gravel bar.  So by the time we rode into the canoe transition we were tired and wet.  Megan rolled up by the fire and slept.  I worked on getting my shoes and socks to dry out by the fire.  It wasn’t long before we were joined by several other teams who all had the idea of resting and drying out by the fire. 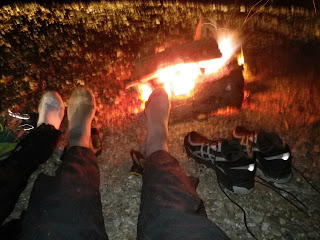 After about an hour we decided it was time to get moving again.  We loaded up the canoe and tied on our glow sticks.  The area had received a lot of rain in recent weeks, so the river was really flowing well.  It was way after dark, but the moon wasn’t up yet, added to that was some really thick fog building up on the river.  We paddled out and were in trouble right away, we came close to capsizing on some logs that we never saw.  Then we got hung up on a shallow gravel bar and decided to wait there for the other teams that were also leaving the transition.  This worked out to be a great plan.  Six canoes navigating the fog together was much better than us on our own.  The canoe leg was only 7 miles, but it took us 2.5 hrs to navigate it in those conditions.
We reached the canoe take-out and were gear checked.  All of our gear was correct, so I checked maps and figured out the attack plan for the last 3 CP’s.  Unfortunately the canoe take out was on the West side of the river and the remaining CP’s and finish line were on the East side.  So we waded across the Huzzah River just North of hwy 8.  All the time we spent at the fire drying socks and shoes was wasted. 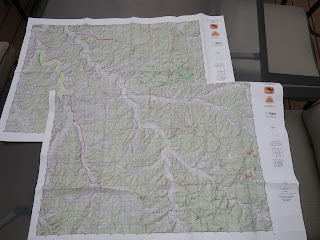 Once across the river we climbed to the top of ridge to look for CP35.  We met up with team Salomon HK looking for the same point.  We compared maps and decided to work together for the next couple CP’s and into the finish.  We found 35 and shortly after got 36, and had a great time talking to team HK while trekking.  We mostly talked about food and race gear, but also told some race stories.  Team HK had some great stories from adventure races all over the world.  It was a real privilege to travel with them.  Yung, if you get to read this….Good Luck at XPD in Tasmania!  We’ll be watching for you on-line.
Link to XPD
We finally made it to CP37.  The finish line.  Jason was there to greet us and tell us about the new cluesheet and map with an additional 15 miles of paddling and 13 miles of mtn biking.  He also warned us that there were less than 6 hrs of race time remaining and the top teams were taking over 7hrs to complete the additional map.  That made our decision easy.  We would not risk going over the time limit to pick up a few extra points.
We stayed around the finish line only long enough to eat some awesome Bonk Hard baked potatoes covered in butter and salt-n-papper with the HK team.  Then went back to camp to get a couple hours of sleep before the awards ceremony.
Bonk Hard always has the greatest race prizes and this time was no exception.  Megan and I were called up for 3rd place two-person coed, which wasn’t a big deal since there were only three teams in our division.  She picked out a set of Yur-buds and I grabbed a great pair of Columbia waterproof insulated gloves.
I finally met up again with Lori and the boys and found out that Bonk Hard is VERY good to their race volunteers.  The each received a very nice Columbia hat.  They all got a free pre-race dinner, and spent the last bit of Saturday night in a heated and very comfy BASS cabin.
Oh and by the way.  The Hydropel worked great.  No blisters even though I had wet feet for at least 28 of the 30 hours of racing.  I will be using it again next month at the Checkpoint Tracker Championship Race.