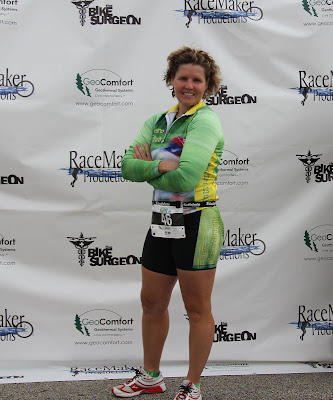 You see it was a nice cool morning, so cool, that the 72 degree water at Lake Lou Yeager was warm compared to the air. So the Litchfield triathlon started out with a bit of a brisk wakeup call. The water was cold enough to be wetsuit legal, but since I was doing the Sprint race, I thought that I could buck it up for 400 meters, I was right, the water wasn’t really bad at all. I mean after getting hit and kicked a few times, then getting my goggles kicked off and treading water while getting them back on and then sucking in some gasoline fumes from a idling boat, the cold water didn’t seem that bad at all. In fact I looked at my time as I ran out of the water and was pleasantly surprised, it was 9:57, I know, right, that looks like a bad time, but for me that is a really good 400 meter swim time. I was pretty darn happy.

As I ran across the beach, I heard a couple “Go Robin’s”, one was from Alan an old college mate, his wife Rhonda was competing in the Olympic distance race. I didn’t see who the others cheering me on were, but I heard them, and I have to say Thanks. It gives me such a boost when I hear people cheering for me during a race, it makes me want to make them proud.

I wish I could say that I cleared transition quickly, but really I’m not sure what I was doing in there, I must have been kicking back and relaxing, because it seemed like it took 10 minutes to get out on the bike, it wasn’t really that long, but it sure felt like it. Finally I hit the bike mount line and was out on the road. I was riding my Pinarello FT1, it’s a super-fast bike, the only problem is, my body can’t seem to live up to the bike. 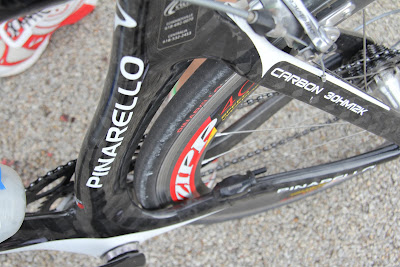 As I pushed up the hill, I started passing people, this wasn’t a very big race, so there weren’t hundreds of people to pass, but still enough to start chasing. I passed 4 people right off the bat while I was trying to get into a zone. Then I kept passing, I got passed by one guy then a girl. I chased the girl and we changed places 6 or 7 times throughout the bike, she finally dropped me after we turned back into the wind for the last 4 miles of the bike. The bike was an out and back and after I made the turn, I saw a lot of friends who cheered me on as they came by on the other side of the road heading for the turn around. With about a half mile to go, Herbie, an old friend’s brother, who I hadn’t seen in years, caught up to me, as he rode past me, he said “hey good looking” I really think I might have been in love! Well that is until he passed me and hit transition right in front of me, I don’t think I love him anymore. 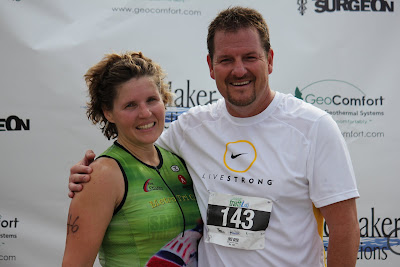 Into transition I went and at least this time, I didn’t sit down and have a spot of tea, I was actually in and out of transition in about a minute.

Right out of transition onto the run, I headed up a hill that went on for about a half mile, then it made a turn and went downhill for about a mile. See this sounds really good doesn’t it, 1 mile of downhill, haha, don’t even think it, the run course was also an out and back, so at the turn around, I had to run uphill for a mile and uphills are not my strength. As I made the turn at the halfway point I saw a Metro Tri Club teammate of mine, Gary, and I knew he would be passing me soon, I know what a fast runner Gary is, so when he passed, which wasn’t too long after I saw him, I asked him to pull me in, well Gary was not very helpful, he just ran off without looking back, I don’t blame him, I didn’t want to drag my trunk full of junk up that hill either. I also saw Russ, a new club member and a first time triathlete, oh my gosh, he was moving, even though I had a pretty good lead on him, I was thinking he might just pass me if he keeps up that pace. I also saw Herbie again, and even though I had fallen out of love with him, I was glad to see he looked so strong, I think he was really having a good race.

I made the corner and headed downhill for a half mile to make the last turn into a 200 meter uphill to the finish. I hit the finish line feeling way better than I should have, just goes to show you I could have gone harder. I guess since I am in such crappy shape right now, I held back some in fear of bonking before the end of the race. Rookie mistake, I should know better than to hold back, but in my defense, my mojo has been off since Monday when my supposed teammate, Chuck, talked me into signing up for Ironman Wisconsin. Well that is the excuse I’m using anyway. My time didn’t suck though, it just wasn’t near my best. 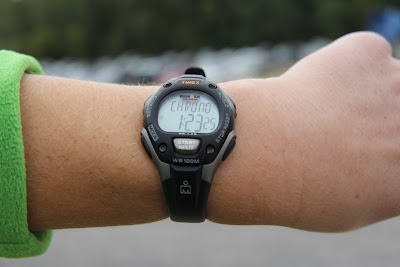 After I finished I turned around to see Russ finishing only about 20 seconds behind me, he had a great race and as it turns out, he won his age group, not bad for his first sprint triathlon. Just a couple minutes behind Russ, Herbie came in, he looked really strong, by next season he will be kicking my butt. Then I turned around to see that Russ and I had a cheering section. Russ’s wife Andrea, brought my daughter China and her and Russ’s daughter Madison out to cheer. They had made some signs to cheer us on, but the funny part was they showed up just as we finished the race. We need to get a more punctual cheering section. 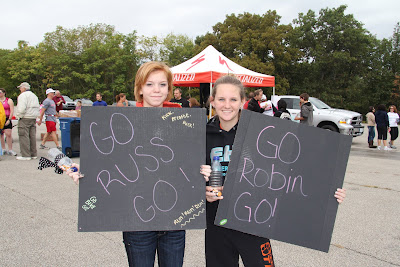 Russ reenacted part of the race for the girls and I showed off my muscles. 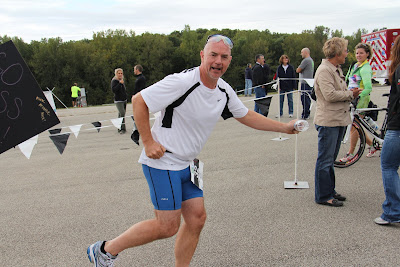 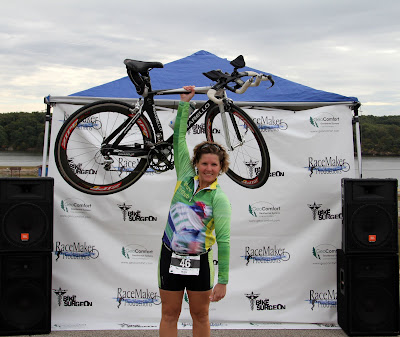 The girls took a picture of the some of the zillas, we were missing one Rhonda, she was competing in the longer race, so she was still out on the course. 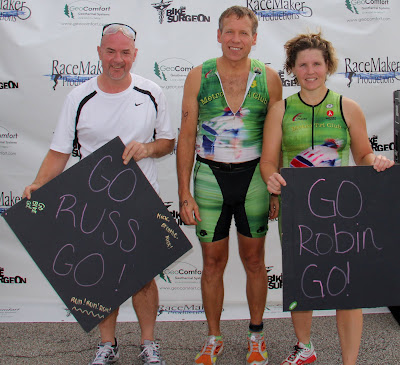 I also ran into a friend from work, Mike, that I didn’t know had started competing in triathlons. This was his first Olympic distance tri, so China and I hung out to take a few pictures of his finish, he finished looking really great, now I have to deal with yet another guy that’s going to start beating me next season. 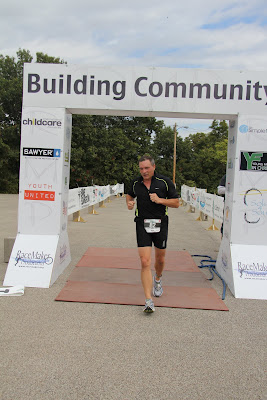 Oh and I have to tell you this, as I was racking my bike before the race, a guy near me said “hey I read your blog all the time”, I thought wow that is so cool, I got recognized from my blog. He was doing the Olympic race, I saw him again after the race, and he had a smoking fast time. I asked his name, it was Robert, so next time I see him, I can say, did you see my shout out to you in the blog.

I had a good swim, an ok bike and ok run, I think I could have worked harder on the run, I guess I will have to come back next year to redeem myself.

One last thing, a BIG THANKS to the city of Litchfield, all the volunteers and the race management crew who brought us this race. This was a very well managed race with a well-marked course and great volunteers working the race. As fellow race director, I know what goes on behind the scenes to pull off a great race, and you guys have it right.