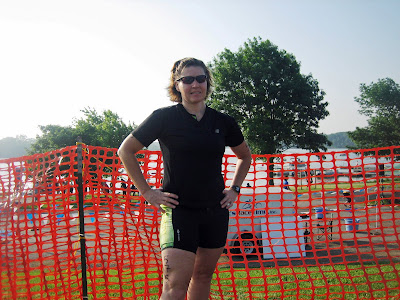 Training for long races, like an Ironman or 50K trail run, takes its toll on the body. The long endurance training wears your body down and it also makes you slower. If you haven’t done a lot of long endurance training you probably don’t believe this. When training for long races you slow your pace down because you need to be able to finish the workout, not go fast. So you never train your body to go fast, just to go long.

Well, this is the root of my current problem. I have spent the last year and a half training for long races, now when I want to do a few short triathlons, I find out that my body doesn't want to go fast. It doesn’t care that it’s a short race, it is used to going slow for a long time, not going fast for a short time. And let me tell you this, when my body decides it doesn’t want to do something there is nothing my mind can say to make it do it.

Here I am, ready to compete in handful of short triathlons this summer and I can’t talk my body into moving fast enough. So this is the story of a slow body and a fast race.

I have completed in the Tri-Shark Triathlon 11 times now. The race is a very popular, it’s held in a small town near Bloomington, IL. The race always fills in just hours and draws many big Tri Clubs from, Northern Illinois, Wisconsin, Indiana and Iowa. Let me say this, those big city clubs have really fast racers. I have never placed better than 4th at this race, but they go 5 deep in the bigger age groups, so I have won schwag in the past. I was once again hoping for a top 5 finish, but with the speed problem, I wasn’t sure if I could pull it off. I just went to the race and hoped for the best.

The day started off hot, it was 80 degrees at 6:30 am when I was being body marked and racking my bike for the race. 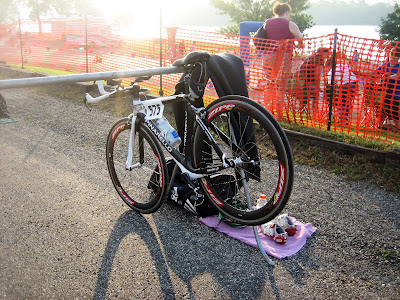 I found a good spot on the end of the rack and I was close to the run out and to the swim in. The announcer let everyone know that the water temp was 71, so wet suits would be allowed. After setting up my gear at the bike rack, I went back to my car to rest for a few minutes in the shade, I had gotten a really good parking spot under a tree, unfortunately is was also right next to a couple port-a-johns, so it was cool, but didn’t smell so good. 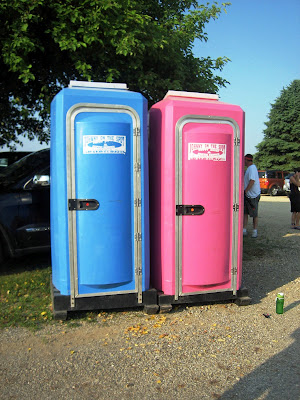 It didn’t take long for the smell to get to me, so I walked down to the water and got a picture of the swim course, it sure looked like a long way around the buoys, but the race director swears it was only 600 meters. I climbed into my wetsuit, which took forever to pull on since I was sweating so much it was sticking to me, but I finally got it on and went for a short warm-up swim. Things seemed to be working well and the cold water felt good. We were called out of the water for the pre-race meeting and then the life guards took their kayaks out to man thier post along the swim route. 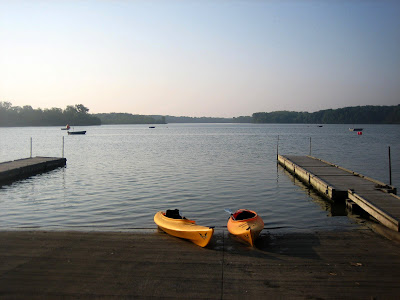 I had to stand in the sun with my wetsuit on for about 25 minute before wave 6 started. When I found out I was in wave six I thought that was going to be a good thing, but soon found out that I was wrong. Six was the second to the last wave and it seemed to have hundreds of people in it. Really there may have been about 60, still it felt crowded. Standing in the cool water waiting for the start felt good, because for the last 25 minutes I had been melting in the sun in that wetsuit. The horn sounded and we were off, this was my first open water swim of the year and I was not having fun. I think 10 people swam over me in the first 200 meters and I was hanging to the outside, I would have hated to have been in the middle. I was kicked and hit too many times to count, I think I was on the verge of hyperventilating. I had to start breathing every stroke to try and get my head back in it. After about 400 meters I started to feel better and finished strong, the problem was I had lost so much time in the first 400 meters that my swim time was really going to drag me down.

I came out of the water and ran up the hill where a volunteer stripped my wetsuit off me in about 5 seconds, it was fantastic, I have to thank that guy! I ran to transition quickly put on my shoes, helmet and glasses and headed to the bike out. The bike out was way at the other end of transition, it seemed like I ran in my bike shoes forever to get to the bike mount line. Finally I was on my bike, the rest of the race would be gravy now. HAHA, I really wanted to believe that, but somewhere in my mind, I knew it wasn’t true. 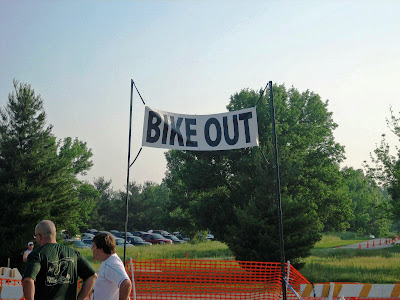 The wind was really strong and I had a cross wind or head wind for most of the race, but I was keeping a good pace. A beetle flew in my mouth at about 3 miles and I hacked up about half of it then washed the rest down with Gatorade. I was passing people, tons of people, trying to get back what I lost in the swim. The rule is once you are within 3 bike lengths of the person in front of you, you have 15 seconds to pass, otherwise if you get caught you will get a penalty for drafting. Sometimes I would have to put the hammer down and pass 3 or 4 people in a row, but I felt pretty good and just kept passing people. A motorcycle with a referee was zipping around the course writing down numbers for drafting penalties. I didn’t get any though. I finished the bike strong, changed to running shoes, grabbed a Honey Stinger waffle and ran out. 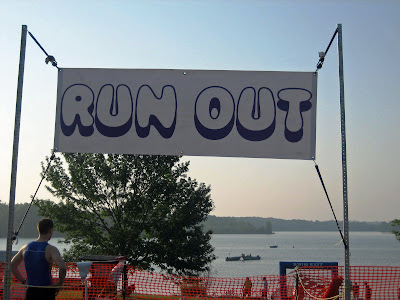 I got about half of the waffle down and couldn’t eat anymore it was just too hot to eat. I grabbed two cups of water at each water stop. I poured one over my head and drank the other. The run was an out and back all in the hot sun on rolling hills. I wish I would have grabbed my visor to put on, I don’t know what I was thinking when I forgot that. I started passing people right away and kept passing them for the entire run. I really thought my run was going to be fast, but when I finished, I found out just how slow it really was. I was not very happy about it. I looked at the preliminary results and saw that I was 7th. I figured since everyone in my age group started in the same swim wave, my place wouldn’t change. Not top 5, that is what I was really shooting for, but hey, the sun was shinning and I was outside, way better than being on the couch watching TV. 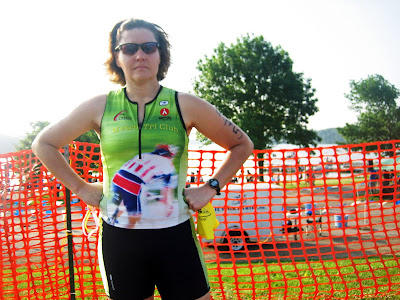 I hoofed it over to the massage table and the poor guy had to put his hands all over my sweaty, smelling body, I really did feel sorry for him, but not enough to forgo the massage. I bet he worked on other people who smelled way worse than me, so maybe it didn’t bother him much. I bet he took a long shower when he got home from the race.

After the massage I headed for the food, grabbed an Avanti’s sandwich, if you don’t know what that is, it’s only the best place in all of Bloomington to eat. They have this great bread and the sandwiches are love at first bite. I also got a couple cookies, an orange and a diet coke. I was so hungry, it felt like a feast. I grabbed all my stuff and headed to the car to pack up and head into Bloomington.

It just so happens that the Edwardsville High School baseball team was playing in the IHSA sectional game there, and my girls were at the game, so I headed over to watch. I took some great pictures at the game and they won, which means they are now headed to the super sectionals and if they win they will go on to compete for the state title. Good Luck Tigers!

My niece just happened to be in a basketball tournament across the street from the baseball field, so I was able to run over and see one of her games also, I took more great pictures there.

Oh, and on a good note, when I got home, I checked out all the race results and found that I had the 6th fasted bike time and 4th fastest run time for my age group. Even with a horrible run time, I still did ok, which means that everyone was struggling with the heat, not just me.