ROCK Racing has enjoyed the support of Kenda for several years now.  Our team members have ridden on the Nevegal with great success.  These tires will hook-up on any surface and keep you moving.  The only plem is they are quite commonly overkill for the terrain we are racing and training in.  All that traction and bulletproof construction comes at a price.  Nevegals are heavy, noisy, and not road friendly, I swear you can feel every one of those giant center knobs rotating under you when road riding.


I also tried the Small Block 8.  It is definitely lighter, has a great road feel, and is nowhere near as loud as the Nevegal, but you give up the awesome traction of those giant lugs.  I really had trouble with the Small Block 8 in snow and mud, lots of sliding around and then recovering steering lines, rear wheel spinning up hills.  It is a good tire when used for its intended purpose, but not for the crazy varying conditions found while adventure racing.
So when Kenda announced last year that it was coming out with a new tire, called the Slant Six, I was curious what it would be.  The advertizing was calling it “The perfect blend of John Tomac's two most winning tires - The Small Block 8 and the Nevegal.”  If Kenda could pull off a successful blending of the best traction and smoothest rolling tire they would really have something.  I wanted them.

About the same time I got myself convinced to try the Slant Six, I made the jump to 29” tires.  I bought a 2011 Trek Superfly 100.  I would no longer need 26” tires, and just my luck, the Slant Six 29’er wasn’t in production yet.  The bike came from the factory with some crappy looking Bonty tires on it, thin sidewalls and almost no tread, the lugs were barely visible, these might be alright road tires, but they would never work on the rocky trails in MO.  I had the shop swap them out with some tubeless Maxxis Ignitor tires.

The Ignitors are good, but may be lacking in durability.  These tires have a nice looking round profile and continuous rounded knobs along the centerline to help make a lower rolling resistance.  They are knobby enough for good traction on rocks and roots, and light enough not to kill you on hills.  This was my first experience with tubeless tires, and they sealed up easily during installation.  My first race (2010 Castlewood 8hr) on these tires resulted in a ripped sidewall.  I was so lucky it happened less than a mile from the finish line.  The Stan’s sealant sputtered and sealed, then finally left me flat right at the finish.


So, I kept watching for a 29’er Slant Six.
More Slant Six details from the Kenda site:

I wouldn’t be buying the downhill version, it doesn’t fit the kind of riding I do, too heavy for extended climbing. The single-ply cross-country tire sounded great, it would be the one I’d be trying.  The Nevegals and Small Block 8 tires I used before were the DTC rubber construction, so I already knew about it.  I really like the thinking behind DTC.  Here is a description of it:

A durometer is an instrument for measuring the hardness of rubber.  This difference can also be felt by hand when applying pressure to a tire’s tread.  Try pressing your thumbnail into the knobs of different tires.  On the DTC tires you can feel harder rubber center lugs and softer outer lugs.
In March 2011, the Slant Six 29’er was finally available.  I would be able to get a set in time for the LBL 24he adventure race!


TPI stands for threads per inch.  It is the number of threads contained in one inch of tire casing. The lower the TPI number, the larger the individual cord diameter is in the casing, which makes the tire more durable. The higher the TPI, the more lightweight the tire becomes and the more supple the ride of the tire.  I wanted lightweight and supple, so I chose the 120TPI tire. 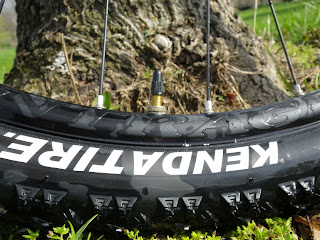 I set them up tubeless with Stan’s sealant and Stan's presta valves.  It took several days for them to seal up completely, but once they did, there hasn’t been a leak.  Tubeless tires allow you to run lower air pressure without having to worry about pinch flatting a tube. This allows for maximum traction because you have more surface area contact with the ground, the tire flexes and forms itself around obstacles, to pull you forward.

The tires are directional.  You cannot just throw them on the wheel any way and expect them to perform at their full potential.  Take a good look for the rotation arrow and install them on the wheel so the arrow is pointing in the direction of rotation.


I got out a caliper and measured one of the tires after it was installed.  With 28 psi the tire casing measures exactly 2.0 inches from side to side.  The next measurement I took was from the outside edges of two adjacent side lugs.  I got 2.25 inches.  The tire packaging said each tire weighs 735 grams.  I took a tire up to my local post office and mis-used government property.  The tire weighed 697 grams.   Maybe not a tire for weight-weenies, but well in the acceptable range for me.


Once I had the tires set up, I started experimenting with pressure.  With tubes it is unwise to go too low or you will get pinch flats.  I weigh 165 lbs, so for my first ride I went with 35 psi front and back.  The tires rode great, I tried lower, and lower.  I finally settled with 28 psi rear and 25 psi front.  At that pressure the tire has a nice rounded profile on top, and a good bulge at its contact patch on the ground.

These tires ride great.  I’ve been up steep rocky climbs without breaking traction in the rear, even when there is loose gravel scattered over the trail.  I’ve ridden miles of paved and gravel roads and they felt smooth, fast, and quiet.  The loud annoying ‘buzz’ you hear from other tires is not as prevalent.  The small ramped lugs on the tread centerline do their job as advertised, the gently ramped front provided a smooth ride and the abrupt end on the tail of the ramp providing great braking. 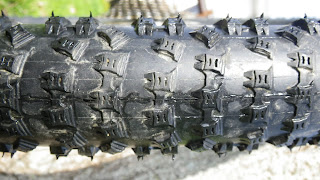 Those big side knobs grab like mad in turns and keep you on track, no sliding out and having to make crazy steering recoveries. They grab wet tree roots without sliding you off the side of the trail. 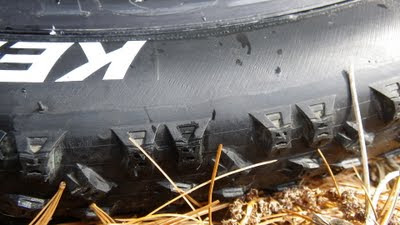 I was waiting to do this post until I got some time to ride them in the mud.  I try to do the right thing and protect our trails.  So, I stay away when they are too wet, but this weekend I raced in Conquer Castlewood.  There was plenty of mud.  I started through the first muddy sections taking it a little easy since I hadn’t tested them in mud.  But I quickly gained confidence on them and by the time I got to the long muddy top section of trail I was flying.  The front grabbed quickly and took me right where I aimed it.  The rear never lost traction or spun out even under power when passing other racers.  The lugs never clogged up and got that heavy feel, mud flung off of them quickly.  The only time I did slide around was on an off-camber greasy bank, and even then the slide was easily controlled.  I never lost confidence or thought I was going down.  Not bad mud –performance for a ‘cross-country’ tire. 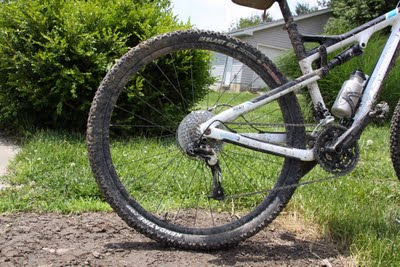 The Slant Six is simply the best all-around tire I have found.  It is now my go-to tire for adventure racing and training.

Robin’s take: I wanted to put in my two cents.  I just recently purchased a Superfly 100 just like Chuck’s and just as Chuck mentioned it came with stock Bontrager tires that just really sucked.  I wasn’t on the bike 10 minutes and my tires were spinning out in the gravel, and it wasn’t even deep gravel.  That same night I ordered a pair of Slant Six tires and now I am in control of my new bike and riding like a pro, well at least like a really bad pro, but it is all because of my Kenda Slant Six tires that keep me on the bike and allow me to ride though any hazard.

Before I end this post, I do have one gripe for Kenda.  We need this tire made ‘sealant compatible’!  Everyone is running tubeless these days, surely there is a market to do this for us.  I hate seeing the disclaimer telling me that sealant use voids the manufacturer warranty.