The Gary Fisher Cake has been showing it’s age. I’ve made some minor upgrades when I’ve broken or damaged pieces in an attempt to keep it up-to-date. But you can only go so far with upgrades before you are just throwing good money after bad. The Cake is still doing its job after all these years of racing and training, but the old (2005) suspension design and weight were starting to show their age. It was time for a new bike. The final straw was when my adventure race teammate Robin (aka Mountain Girl) showed up at the ‘Tracks and Treads’ race on her new Trek Top Fuel. I got serious about buying. 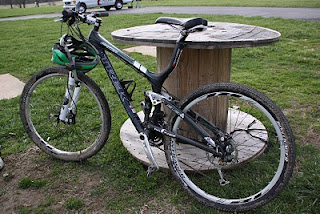 I started the search knowing that I wanted full suspension. All day adventure race rides are tough on old bodies, so FS was a must. Coming off the ‘built like a tank’ Cake, I also wanted the lightest and most forgiving frame I could find. In most cases that means carbon fiber. And of course I wanted as close to top-of-the-line components as I could afford.

The internet is a great tool for finding what is available and for how much. There are reviews of every component and frame imaginable. So I started researching what bikes would be top candidates, and what components I wanted on them. There are so many bikes out there, the list got big fast. I even considered building my own for awhile.

I talked to people in all the local bike shops and on all my training rides, but in the end it came down to the test rides. I rode cross country and trail bikes from all the big brands, but I was saving Trek for last, I really liked that their carbon frames are made in America. I rode a Top Fuel like Mountain Girl’s and I liked it. It was light and fast and maneuverable. Minutes after that ride, I tried a Trek Fuel EX. This was a bike I could ride all day. It was great. Light and fast and maneuverable, and somehow more comfortable than anything else I had tried.

So the search ends there? Trek Fuel EX is the one? Would have been, except for friends talking about 29’ers, and how they would be perfect for my kind of riding and long endurance races. I went back to the internet to start researching 29ers. I wanted a Fuel EX in a 29er, but Trek didn’t make one. I rode another manufacturer’s 29er that felt like a giant floating boat under me, hated it. I rode a Felt carbon hardtail 29er, it was good, really good, but not perfect and not FS. So my new bike search stalled and lost a little momentum. Maybe I would never find the perfect bike.

Then this summer something amazing happened. Trek became owners of Gary Fisher. The SuperFly 100, which I had previously written off as being too expensive, had now dropped in price. 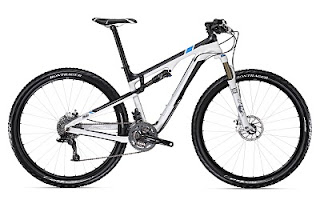 It got a Trek name on the downtube, which meant it would come with their fantastic warranty and support. But nobody had one, the 2010’s were sold out and no more could even be ordered. So I test rode the HiFi, which was the closest thing I could find to the Superfly 100. It was great. It convinced me the Superfly 100 was my bike.

I told The Cyclery that this was the one. They put in an order, and warned me that it might be a long wait while Trek got some 2011 bikes built and all their previous orders filled. I might not get one until around the end of September or even into October. This would be getting really close to some great fall races. Maybe it wouldn’t even be here in time for the Berryman Adventure.

If you’ve read any of these blog posts, you already know that The Cyclery in Edwardsville is ROCK Racing’s favorite bike shop. Well they proved why again. I got a call last week that my bike had shipped, over a month ahead of what I expected. Another call the following Tuesday it had been delivered and was ready for me to come in and be fitted.

The bike was hanging on a maintenance stand and after a quick discussion with Andy (shop mechanic), I decided to go tubeless. Andy started to set the wheels up and took the time to explain the whole process to me as he worked. 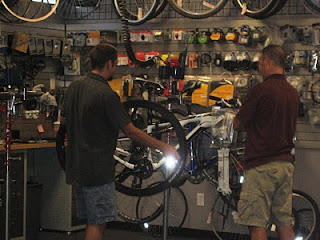 Then we ran into a snag, the tubeless liners were made for asymmetrical wheels and the Superfly came with Bontrager symmetrical wheels. Andy decided that the liners would not be good enough and ordered a new set. I watched this whole thing and could only see the slightest difference between symmetrical and asymmetrical. This, on top of everything else, made me realize that The Cyclery has top-notch mechanics. We put in a set of tubes to use until the new liners come in and continued by setting up shock pressure and the rebound, cut an inch off each bar end, checked the derailers, brakes, put on pedals, and demonstrated the new style Trek rear QR. He made time to answer all my questions even to the point of explaining the inner workings and adjustments of the brake calipers. Then it was time for the first test ride. 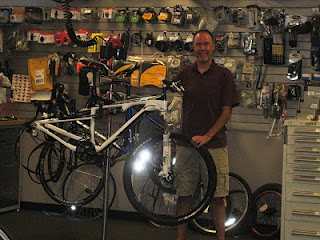 It felt great. I had thought about bringing the old saddle from my Cake, because I liked it so much, but I’m glad I didn’t, this one is even better. We made a couple more small adjustments to seat height and angle, handlebar clocking, brake lever reach, and took another ride. Then a couple more minor tweaks to the shock rebound knobs and then another ride. And it was like heaven, this bike fits better than anything I’ve ever ridden. It wants to go fast. I feel like I can ride anything. Who is up for Leadville or TransRockies in 2011?

Before I finish this post, I gotta say Thank You to the Mountain Girl for getting me looking at Trek bikes. Thanks to The Cyclery in Edwardsville for somehow getting this bike so far ahead of schedule. Thanks to Andy at The Cyclery for the awesome fitting, set-up, and answering endless questions. And Thanks to Trek for building this great bike!

Check out these pics of the first ride: 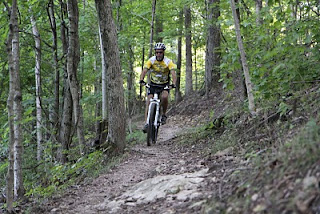 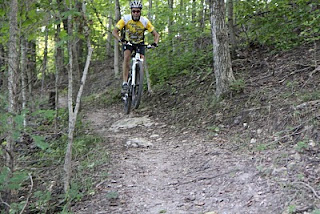 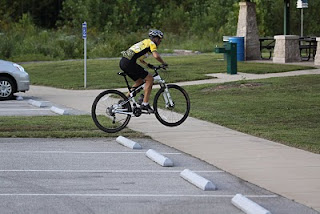 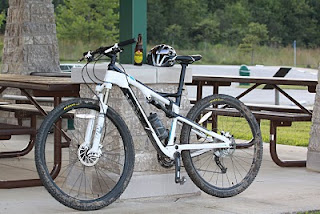 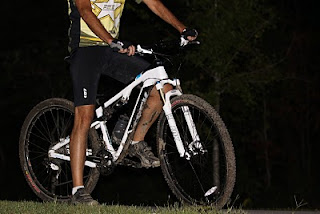 The new bike is so great I didn't want to stop riding just because it got dark.  Too bad the park rangers didn't like my all-night ride idea.  I guess I should be thankful they only wrote me a warning: 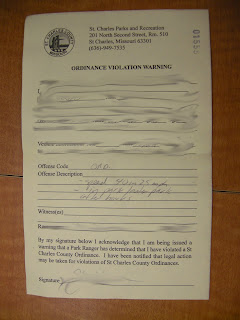