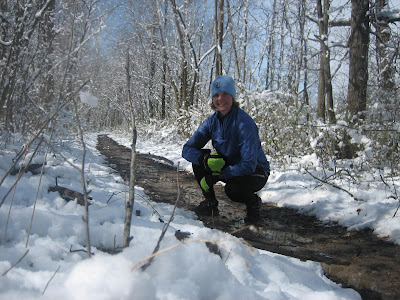 This time last year
Ok, let me tell you a story and you can decide if it is coincidence, fate or the actions of a higher power or maybe it was just a very freakish Friday.
This is how it all went down. I’m talking to a friend at work on Friday morning, explaining that the time off, not running or biking was not making a difference in how bad my tailbone hurt. Then I explained that just maybe I should run this weekend, just to see if my butt is getting any better. After some discussion and words of caution from my friend, I was still thinking, well it couldn’t hurt, I will just do a few easy miles on Saturday morning.

So I went back to doing my work, thinking of how great it would be, to be out on the trails again, even though I knew I would be going against doctor’s orders and it probably was going to be a bad idea. BUT…. I am just so sick of watching all my friends out on the trials having fun while I’m sitting around getting fat.

As I was sitting at my desk working, my phone rang, when I picked up, to my surprise it was… (I’m going to change the names to protect the innocent here) nurse Stephanie from doctor Morelli’s office. The conversation went like this, “Dr Morelli would like to speak with you, do you have a few minutes to speak to him”. I was confused, why would the doctor be calling me. So I said “sure, I have a couple minutes”, then Dr Morelli came on the line. This is how it went down.

Doc: “Hey, how are you feeling, how’s the tailbone feeling, is it hurting any less”.

Me: “ Well, I had one good day when it didn’t hurt much, but the rest of the days have been about the same”.

Doc: “What are you doing, are you working out”

Me: “Only swimming with no kicking, well except for those first couple days after I saw you last, it took a fews days to start the no workout plan”
Doc: “It’s going to take some time, stick to the plan”
Me: “It’s really hard to do this, but I will try”
Doc: “Ok, when do I see you next”
Me: “I have an appointment on February 27th and my six weeks will be up then too”
Doc: “Hang in there, it’s going to get better, see you in a few weeks”
That was the end of the call. Come on, doesn’t it seem just a little crazy to you. First, what kind of doctor calls to check on you, I have never had a doctor call me with anything, but bad news, never to check on me.

So it makes me think how did this happen.

1. The doctor doesn’t trust me to follow orders, which I really don’t blame him for, I mean I would never trust me, so he called to make sure I was doing what I was told.

2. It was just a crazy coincidence that he happened to call and check on me just 30 minutes after I had made up mind to sneak out and run. And I was really going to sneak to, there was no way I was telling my family what I was doing, I had just planned to get up early and go run, before they got out of bed on Saturday, then no one would be the wiser.

3. Some guy named God was sending me another message, kind of like when he sent me that last message, you know when I suddenly fell down the hill when I was out running and shouldn’t have been.

I’m not sure what the reason was for the doctor deciding to call at just the right moment, basically stopping me in my tracks or before I could make tracks that is. It was definitely a freaky Friday.