People always ask me how I became a Triathlete or an Adventure Racer. When I think about it, it was just a natural progression from my first love, which is running. The funny thing is, my journey to becoming a runner was all just by circumstance.

I never set out to be a runner, I didn’t start running in grade school or even jr high, I didn’t start running until my sophomore year of high school. I grew up with 4 brothers and I was always playing, basketball, baseball, football, soccer and any other game that happened to be going on. Most often I was the only girl playing with a bunch of boys. When high school rolled around, my thought was to go out for basketball. I’m not tall, but I was pretty good at shooting and could move around people fast, I was actually pretty good at basketball. My uncle bought us a hoop for Christmas one year, we put it up on a tree in the backyard and played so much that all the grass was gone.

So school started and I was a freshman, I was ready to go out for the basketball team and was pretty sure I would make it. I mean come on, I was playing tackle basketball at my house with a bunch of boys way larger than me. We never played a game that I wasn’t on the ground 3 or 4 times.

Two weeks into my freshman year, before basketball season started, I was in a bad car accident. I crushed both pelvises, had a blood blister on my lung, had a head injury and nerve injuries. I spent a month in intensive care in a hospital that was known for its work with head injuries. I was out for a few days after the accident, I think the accident happened on a Monday and I woke up on Thursday in this hospital. The nurse told me I had been in an accident and that she would get my mom, then I was out again. I finally started waking up long enough to figure out what happened, but my head hurt so bad that they kept me pumped up with pain meds and I felt like I slept for a few weeks. As I got better, I started noticing the people around me. The guy in the next bed had been in a bad accident, he was the driver and the only one to survive. When he would wake up, he would start screaming because he realized 3 of his friends had died in the accident. When my room door was open I could see into a room across the hall from me, there was a guy whose head had been run over by a tractor tire and it had the indention of the tire in his head, he looked like he was dead. I kept wondering why I was in with these people, I was perfectly fine, or at least I thought so.

After two weeks I was moved to another room, it was still intensive care, but was less serious. After a month, I was in a normal room and started physical therapy, so I was soon walking with crutches. Due to the nerve damage, my shoulder was drooping, if you notice still today, I walk, run and ride crooked. I also had double vision, so I had to wear an eye patch, if I covered one eye, I would see in singular, but with both eyes everything was double, so I knocked stuff over and fell off steps, that lasted for about a year. I was released from the hospital in 6 or 8 weeks, I’m not exactly sure now, it was a long time ago, but when I was home, I still couldn’t go to school, so a tutor came in everyday to work with me on my school work. I finally went back to school, but by then most of the year was over and I missed basketball season.

I know, what you are thinking, that I’m just rambling on and on, you wish I would get to the point. Well this is the point, this is part of the circumstance that led me to become a runner, the spiral that started the long haul to triathlons and now adventure racing.

So I missed most of my first year of high school, but over the summer, I became stronger and stronger and could walk without crutches, even though my walk was crooked, at least I could walk. My Sophomore year started and basketball season rolled around. I had a job and worked after school one day a week, so I wanted to find out if that was going to be an issue. I went to the basketball coach’s office and told her about my job and asked “can I still play basketball if I miss a practice each week”. Her answer I will never forget “no, if you can’t be here every day, you can’t play, but I really doubt you could make the team anyway”. I was so mad, she had never seen me play before, and she already told me in no uncertain terms that I wasn’t good enough.

I walked out of her office, and went straight to the track coach’s classroom, he was there, so I asked the same question. His answer was, without even asking me if I was a runner first, “sure, I will give you the Monday workout and if you can find time to get it in, great, otherwise, you can just work harder the other days”. You know what, he didn’t know me, he didn’t know if I had any athletic ability, and he took me anyway.

Over the course of the next three years, my coach Mr Dean, whipped this non-runner into shape and made me a runner. He got me involved with a running club that he was a member of and I continued to run year round. I started going to road races with the club and met some great friends, many of whom I still workout with today. In my mom’s eyes, Mr Dean and his friends were saints carting me around to races, keeping me out of trouble. Oh little did she know what bad influences they were on me. Oh and the stupid pranks I played while with them, like one time pulling John’s shorts down to his knees in the middle of St Louis on the day of the St Pats day parade with virtually thousands of people around. It was really funny though. I became a pretty good runner, working out with these guys that were way faster than me, especially John and Harold. 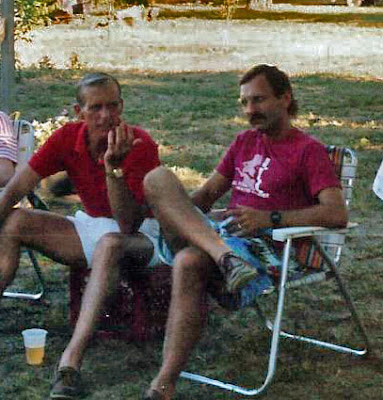 Harold and John - Back In The Day! 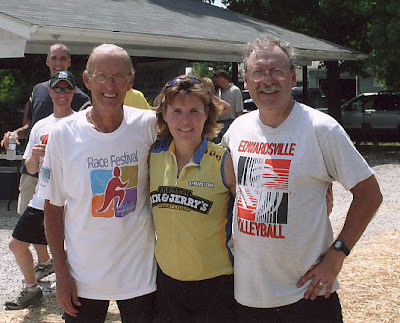 Harold, Robin and John
High School ended, but my running career didn’t, I went on to run cross country and track and Southern Illinois University, where I had a scholarship to run. I also attribute the scholarship to Mr Dean, although he never told me, I found out that he contacted the coach there and that is how I got picked up to run. I was also the first female to ever run cross country for SIUE, my freshman year, I was the only female on the squad and I trained with the guy’s team. The next year the school had a full girls team.

So how did this get me to where I am today, that’s easy, after running about 6 marathons, most of them I trained with John, (that’s Mr Dean, he told me one day when I was about in my 3rd year of college, that it was time I quit calling him Mr Dean and started calling him John), I decided I wanted to do something bigger, so I started riding a bike and swimming, and entered my first triathlon, which led to mountain biking and off-road triathlons. I kept competing in these events, then entered some pure bike race events, but was still looking for something bigger.

In comes Chuck, Chuck and I worked together and he was a martial arts guy, but I spent so much time talking (imagine me talking that much) about trail running that he got sucked in, soon he was running then he bought a mountain bike and it wasn’t long until we decided to do an adventure race. The first two years we went to the races and were not very good, we just stood around after the races listening to all the good teams and getting tips on how to race better. By our third year of racing we started placing in our division and now we are in our fourth year of racing and this season holds hope for our best year yet.

So that is how I became a runner, by pure accident. So I guess you could say, I do what I do today all because of John. I’m not sure whether to thank him, or hate him for sucking me into this all encompassing addiction to racing that I now have.

One side note: I still run and bike with John, we discuss everything when we are training together, he gives my advice and his opinion even when it’s an opinion I don’t want to hear. He is one of my most trusted and respected friends, but I will never tell him that. See running gave me way more than just a college education and fit body, it gave me friends and lessons that will last a lifetime.