Ahhhhh, December, we all know what that means, time for the Pere Marquette trail run. You could not be a slacker if you wanted to run the race this year, the race filled in just over 6 hours. Good thing for me I entered at 5 am and got in. The way things are going, next year, I will need to be at the computer at midnight when registration opens. Funny, you would think being the Vice President of the Metro Tri Club, I would have an automatic in, but not true, I have to give it my best shot and try to get in before it closes just like everyone else. If I didn’t get in, I guess I could threaten the president, Mike Wever, or something, but he is a tough cookie when it comes to this stuff, so threatening may not work. I think the next time I can get a photo of him looking really bad, I will just keep it as my ticket in, just in case I don’t make the cut one year.

So once I was in, I started some hard core hill training with my friend Jenny, she was kicking my butt and making me run hills when I really didn’t want to. 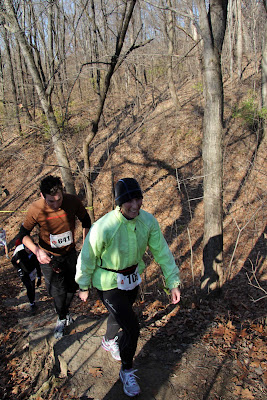 Jenny on the rock steps
My goal was to try and run not a PR, but something close to one. I really wanted to run a 1:24, I have run this course in 1:19 before, but I knew I wasn’t in good enough shape to pull that off this year. Along with the hill work we were doing once a week, I started running the PM course every couple weeks. My first training run was 1:33, then a few weeks later, another 1:33, then a 1:30 and my 4th time on the course a 1:27. I was feeling good and was pretty confident that I could make my goal of 1:24 if the conditions were right.

Well the best laid plans never seem to work out, the week after I ran the 1:27 I broke my tailbone by sliding down a muddy hill and hitting a rock. Yeah I know, it’s pretty frustrating to be on target for a goal and then get injured. Even though I had hopes of making it back injury free before the race, once again, I was wrong. I really hate to admit that I was wrong and some doctor who doesn’t even run was right, but in this case I have too.

So when PM came around I was still nursing the tailbone, but I didn’t want to miss the race for two reasons, first because I love the race and I just don’t want to miss it and second because to win the coveted Godzilla of the year award, I needed to finish PM. I didn’t have to finish fast, I just had to finish.

Race day came and I picked up Russ, a new Team Godzilla member and we headed out to PM. Russ was going to take picture during the race and checkout the course to see if he wanted to do it next year. (see all Russ’s picture here) I had to get to the lodge early because I was distributing vest before the race. 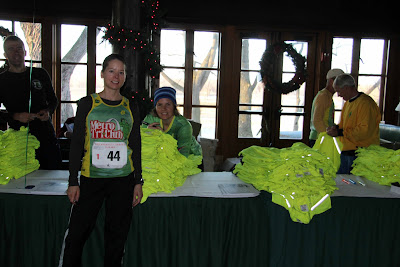 Robin and Krystal
Giving out vest is a great job because everyone gets one, so I got to see just about everyone I know, when they picked up their vest. It was really kind of fun, and of course I heard butt jokes from everyone. I’m actually the butt of all jokes now. 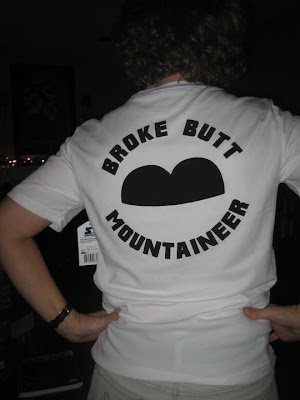 Mark S got me this shirt for Christmas 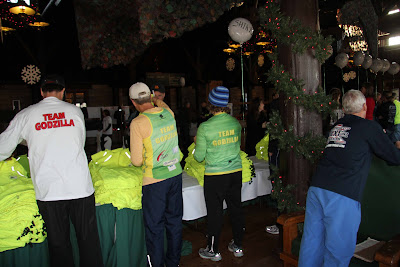 The gang handing out vest
It was time for the race to start, so I headed out to the starting line with Keith and Chuck, who were both working the vest distribution with me and racing also. 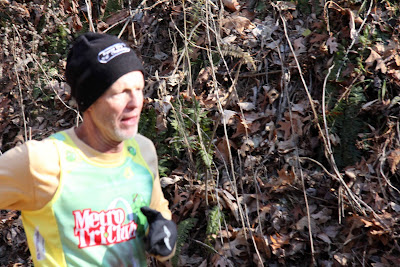 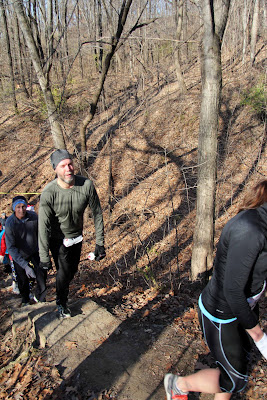 Chuck on the rock steps
Of course, they were in much earlier waves than I was in. I was in wave 13, I have never in my life been in a wave greater than 7. In fact, earlier in the week when I found out that I was in wave 13, my pride was hurt and my spirit was broken. I went as far as too yell at Mike Wever, who sets up the waves. I said “Mike, I know I have a broken tailbone and will be slow, but come on, WAVE 13”. He was very apologetic and said, he didn’t know how that happened, we figured it out, the previous year I ran with a friend who was injured and didn’t want to run alone so we just ran it for fun and the time was pretty darn slow, that brought my average down and that’s how I ended up in wave 13. Mike did offer to put me in wave 1, but I declined. I thought it would be better to be in wave 13 and be able to pass people then to be passed the entire run. 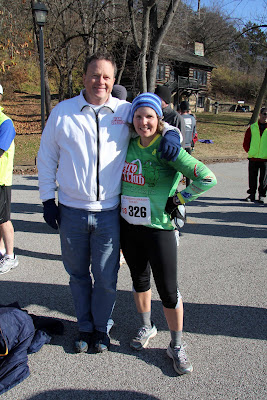 I still like Mike even after he put me in WAVE 13
The race started and before I knew it, Mike was calling for wave 13 and off I went, I was actually up front in my group and didn’t really get passed by very many people, I even passed some people in earlier waves. My tailbone was hurting pretty bad on the uphills, yeah I know, everything seems to be an uphill at PM, but I was not stopping, I just wanted to run the race and cross the finish line on my own two feet. I did walk a couple times, but mostly because the runners in front of me were walking and there was no way around them. Of course, that was not the issue on the rock steps, I walked those because if I didn’t I would have had a heart attack. And wouldn’t you know it, the rock stairs is where Russ and Patrick were standing with the cameras. I yelled no taking pictures of me walking, but you know that is just what they did. 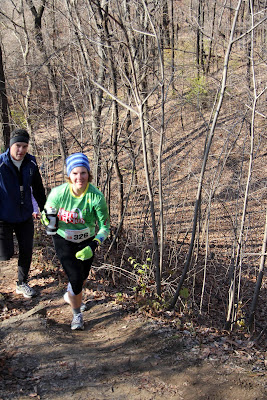 Just before the end of the race, I saw Jim D on trail and he yelled “how’s your butt” I said it was going to finish the race and just then a girl behind me said “are you Robin”, I said yes, we had never met, but I had two registration transfers that I sold to her and now the reason she knew who I was, was because of my butt. See didn’t I tell you how funny the whole tailbone thing has become.

I soon crossed the finish line to the cheering of friends and strangers, it had been the perfect day and the best possible run for me. There is nothing I would have rather been doing than racing PM on this beautiful December day surrounded by such great friends.

After the race I stood around talking to friends. I saw Wendy D, she had a great race even with a bum ankle that she had injured badly just recently and she like me, was just happy to be out running. 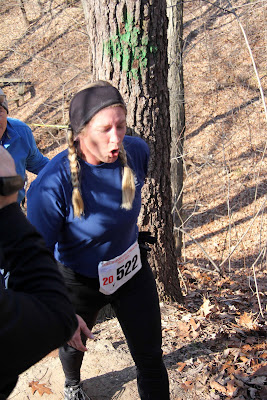 Wendy
Since Russ was at the finish line taking photos, it was like having my own personal photographer, he snapped photos of me and many of my friends, while we told race stories and No they aren’t like fish stories, I really did do that triple lindy and land on my feet then jump over a deer crossing the trail, while eating a Honey Stinger waffle and getting a drink from my Ultimate Direction water bottle. 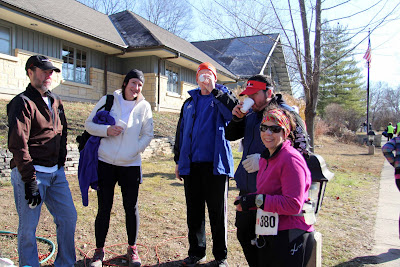 The Gang Hanging out 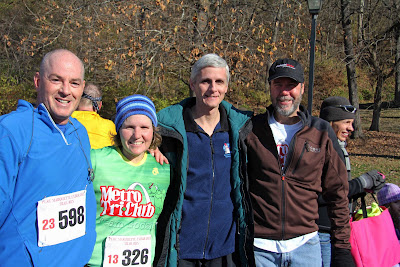 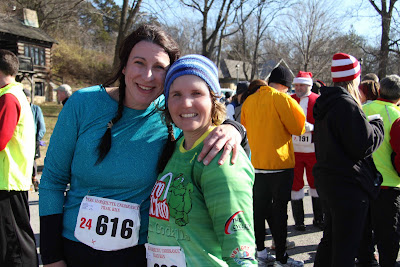 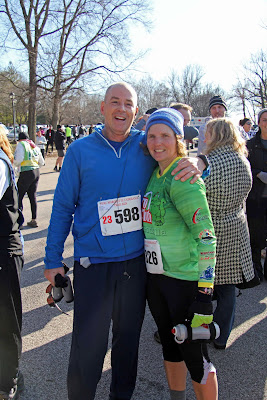 Robin and Mike A 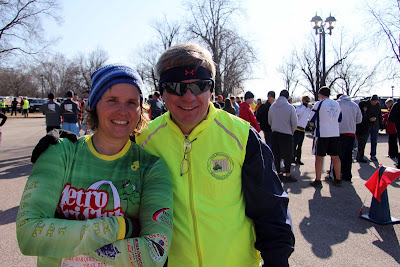