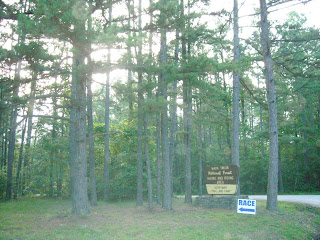 The date for the annual Bonk Hard Berryman Off-road Duathlon was changed this year. It had been in August the past several years, so moving it to the beginning of June had me thinking of cooler temperatures. In the week leading up to the race the weather reports gradually crept up from mid-eighties into the mid-nineties with unrelenting humidity. Hopes of a nice cool day vanished. Previous year’s results ranged from one lap (with a broken foot) to four laps in 2009’s awesome weather. My goal is to always do better than a previous race finish, so I was looking for four laps this year with a better time than last year. There were even secret early hopes for a 5 lap race that vanished with the weather reports.

The 12hr race start time was 7:00am so I decided to camp the night before. It turned out to be a good call. I built up a big pile of leaves and pine needles under my tent, making it comfy as the mattress at home. I left both sides of the tent wide open and it cooled off nice once the sun went down. The last thing I remember was hearing the owls and tree frogs, and then the sun came up. I had slept great. 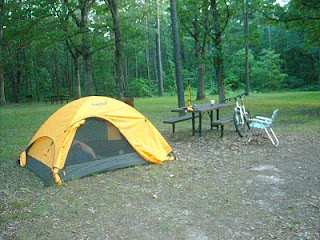 Race check-in was under the campsite pavilion. At Bonk Hard races you are practically guaranteed a fast and well organized check-in. There is never a hitch. It’s also so cool to check-in when the organizers already know your name. Just walk-up, and they say “Hi Chuck, here’s your number”. Prizes this time were a good looking tee shirt and a combo Salomon whistle/light.

Setting up my transition spot the next morning I found that I forgot to pack my favorite handheld water bottle, so I had to use a back-up. Several members from team Alpine Shop pulled in and we decided to share the table next to my tent. Bikes and gear were laid out and carefully arranged. I noticed Alpine Shop spread a big plastic tarp on the ground under all their gear, keeping it all clean and dry. I like this and might try it out at my next race. A quick discussion and we all decided to do the run first. “Get it in before it gets too hot” was the reasoning. I tied on my Inov-8 Roclite 305’s and went to the start line.

The first run felt great, my time was 43 mins, followed by a fast transition switching into bike shoes/helmet and putting on the camelback. The first ride was great too, but it always surprises me how long and rugged this 14.5 mile loop feels once you get into it. My ride time back to transition was 1:41.

At the beginning of the second run, I knew it was time for some calories. I grabbed a turkey sandwich from the cooler. About 2 bites in something went bad in my stomach; I gave up on the sandwich and went out on the run. I had a slower run on the 2nd lap but still no walking (0:57). But I was really feeling the need for food.

At the start of the bike I pulled out a peanut butter n honey sandwich. It went just as bad as the turkey. I could only eat a few small bites. The second bike was much slower (1:52), it was getting hot, and not eating was killing my energy levels. At the end of the second bike I pulled out a bag of the ROCK Racing secret weapon: Iced Oatmeal Cookies. I barely ate one cookie. I had to force it down. This has never happened before.

There are several really long and rough downhill sections on this trail. I was flying down one of them and my rear tire pinched on the side of a rock and made a loud rubber ‘boiiing’. I still can’t believe I didn’t rip the whole sidewall off my tire. Major thanks go to Kenda for their Nevegal tires. Toughest tires I’ve ever ridden. 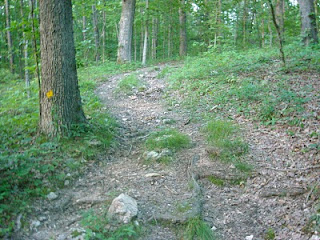 I began the third run with my stomach feeling like it was going to explode. I could barely drink Gatorade and water by now. The only thing that seemed to be going right with my refueling was the Enduralyte capsules. I took two each lap, and never had any cramps. This third run was hot, I was out of energy, and I had to walk the biggest of the hills. I caught and passed another racer who was walking the trail. The heat was getting to more people than just me. I had slowed to a run lap time of 1:24 now.

I started the third bike lap with a Honey Stinger Gold gel. I got it down and it stayed. I never would have finished that lap without it. But one was all I could do. This lap was long and slow and hot, I was on the small chainring almost the whole ride. I caught myself again and again picking bad lines, and going into corners too wide, hitting downhills too fast, and coming off the edges of the trail. I got lapped three times by the lead racers.

When I finally rolled back into transition I told the race director that three laps would be enough for this year. I went to the transition area and dumped a cooler full of cold water over my head and recovered for awhile. I had the idea that I could do another run lap, but I knew I didn’t have another bike lap in me. I went over to the pavilion and hung out with other racers who had finished their race already too. Jason and Laura from Bonk Hard had some great BBQ burgers and chips and beer and sodies for us all.

This was not a good race performance for me, but maybe some of the things I learned will help in the future. At the pavilion we were all talking and the advice I got from some of the racing veterans is when it gets hot like this in long races you have to get calories from liquids. Stomach problems in the heat are commonplace. Suggestions ranged from Perpetuum, to sugary lemonade, to Boost or Ensure. I will have to give them a try on some long training days this summer. I was also able to get some great tips about navigating after sunset from one of the best nav guys in adventure racing. Perfect timing. The Dusk to Dawn race is barely a month away!