If the Non-Race, otherwise known as Carnage at the Creek and the Habitat for Humanity 5K were on the same weekend, which would you pick?  Easy question isn’t it, of course you would pick Carnage at the Creek, wouldn’t anyone….  Well it’s not that easy.  Now hear me out, before you start thinking that I went nuts, I mean I had to have gone nuts to pick a road 5K over an adventure race, well it’s really an adventure non-race.

See Carnage at the Creek has no entry fee, and no prizes, well I guess there is sort of a prize, seeing your friends do really stupid things because they lost a bet about the outcome of the non-race, which is a prize in itself.  Oh and there is the pride of winning, not just anyone can win a non-race.  So why in the world would I miss out on this for a 5K.

So here’s the story, my daughter Jade, who has never been a runner and always hated running, in fact, she was the furthest thing from a runner, she was a cheerleader.  Well about 6 months ago, Jade started running.  She is a student at Illinois State University in Bloomington and she saw a flyer for a 5K, she decided she wanted to run it, so she called me to asked if I would run it with her. Of course I said yes and just two days after entering the race I found out about the date of the non-race.  Oh I wanted to do it, but I also wanted to support Jade in her quest to run a 5K.

So there you have it, although I was completely jealous of Chuck and his availability to compete in the non-race, I knew my choice was the right one.  Plus Chuck was able to pick up Kate, a good friend and fellow adventure racer as his partner for the non-race. Not only is Kate a top notch adventure racer, but she is also a fellow blogger and a very good one at that, if you haven’t read her blog, you should, check out SuperKate when you get a chance.
So as Chuck and Kate headed for the non-race, I headed to Bloomington.  My daughter China and her boyfriend Alex went with me.  My brother Joel and his family live in Bloomington, so we planned on spending the night at his house.  We had a great time, with my nephew Noah, serenading us with renditions of songs from Bruno Mars, Nickleback and Michael Jackson, he even taught us to Dougie. 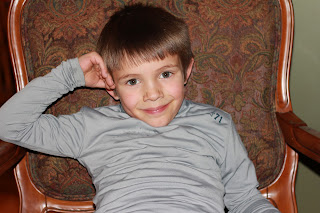 We also went to Avanti’s, which serves the best Italian food in Illionis, for some carb loading and some trash talking.  That is where Jade was trashing me and telling me how she was going to kick my butt in the race. Little did she know, I already had a plan to just run along at her pace and then stomp her at the end. So I let her talk trash, because I knew I would win.
Race morning came, Jade and I headed to the race and we drug Zach, Jade’s boyfriend along to take photos, of me kicking Jade’s butt. It was cold and windy out, so we were sitting in the student center keeping warm waiting for the start of the  race. Oh, and Jade was acting like she was sleeping in the chair trying to trick me into believing that she was too tired to run the race very fast. 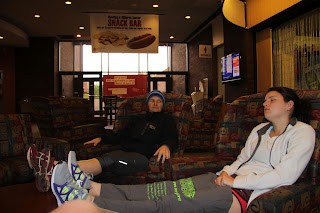 We soon were on the starting line ready to go. 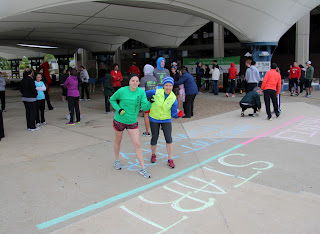 We took off at the back of the pack. 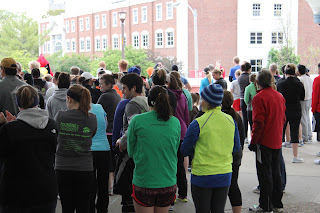 Jade didn’t want to start too fast and her only goals, besides beating me, was not to be last or get beat by the lady with the perfectly matched running outfit on.  I knew we wouldn’t be last and usually the women in the expensive, pressed running gear aren’t that fast, so I figured the only upset would be when I smoked her butt at the finish line.
The race was going smoothly, we were running at a pace that was much faster than I thought Jade would run.  Jade was running just one step off my shoulder and she was keeping pace without a problem.  We headed around the last turn with about 200 meters to go, Jade said, when we get to the bridge the race is on, that gave me about 100 meters to smoke her.  We hit the bridge and Jade took off like a lightning bolt, I have no idea where the energy came from and I had no idea she could sprint. 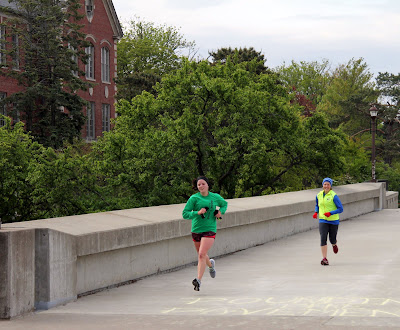 I gave it everything I had, but I don’t own any fast twitch muscles, so it was really a sad sight, especially when she crossed the finish line in front me. 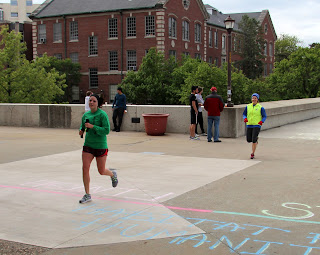 I know RIGHT! she beat me, I had no idea she would be as devious as me and pull the same plan I had on me before I could pull it on her.  It’s ok though, I was so proud of her for doing it and so glad I was there with her, plus Reggie Redbird was proud of both of us. 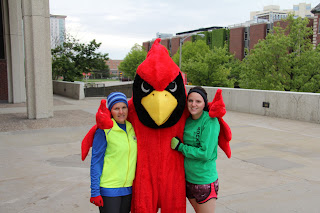 Next year I hope the timing is better and I can make it to the non-race, but if not, I hope I can at least kick Jade’s butt.