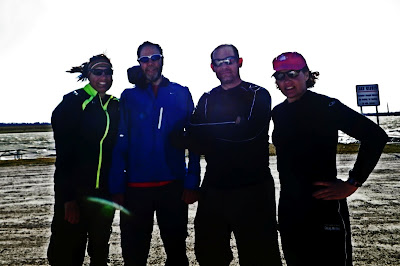 Leap day only comes around once every four years, so we have to make it count. I know what you’re asking yourself right now, how can I, make this Leap day count for more than just another usual day. Well if you are a ROCK Racing team member you would think of oh so many ways to make Leap day, Epic! Well you would also think of many ways to kill yourself, but this year we chose a safer, I didn’t say safe, I said safer way to make Leap Day, Epic.

Chuck, Patrick and Lori and I decided that the perfect Epic Leap Day adventure would be best held in a kayak. Now if you know me, I’m sure you are saying two things, first Robin hates Kayaking and second Robin does not own a Kayak. You are correct, that’s why my first thought was “I hate kayaking” and my second thought was, “what the heck, it’s a day off work and the weather is going to be beautiful”, maybe, I can borrow a kayak. I am very lucky to have a good friend who owns an awesome kayak, and for some reason he either trust me with it, or he has no idea how bad of a kayaker I am. So no matter what it is, thanks John for letting me borrow the kayak, and next time I ask you to borrow it, please tell me no, because in the end, it will be a bad idea or at least that will be what I will be thinking after another day on the water. It always sounds like a good idea, but never really ends up that way.

So the plan was to take Dardenne Creek to the Mississippi River, and paddle across to Dardenne island. Which by the way has never been done before, at least that we know of and the warning we received by the park rangers, made it seem even more likely that we may not make it. The day was warm in the 60’s, but with 25mph winds gusting to 40mph. We had to carry the kayaks about a quarter mile to the creek then lower them down with a rope and climb in. We made it in the water fine and the trip was excellent, we saw tons of stuff in the water, every kind of ball imaginable, duck decoys, a baseball bat, a TV, a tire, about a million turtles and of course the best find of all, a deer head with a big rack attached. Patrick found the deer head and he yelled to me that he spotted a buck, I thought he meant a dollar, until I turned around and a deer skull was watching me from the front of his kayak. Oh and believe me Chuck and Patrick picked up most of the stuff floating in the river, always trying to outdo each other with the best find of the day.

We made it across the river to the island and spent some time slack lining, well we tried to slack line, some of us were better than others at it. Then we explored the island a little and finally decided to head back. This is where I decided once again that kayaking wasn’t for me. Getting back across the river wasn’t so bad, but when we turned into the creek, we were not only paddling upstream, but we were fighting the wind and for a time it was one long 40mph wind gust. There was a period of time when Lori and I just paddled like mad women and went nowhere, in fact I think we moved backwards. Lori made it through the wind faster than me, she is a much better paddler than me. I fought the wind for what seemed like hours, and got nowhere. I could see, Chuck, Patrick and Lori, up around the bend out of the wind, but could not get to them, finally there was a sort break in the wind and I made it through. My spirit was about to break by then, but I continued to paddled on. At the end of the adventure, I was almost insane trying to land the kayak, but with Patrick’s help I made it to dry land, I almost laid down and kissed the ground.

I decided to use the video and photos taken along the way to make a short movie of the Epic event, so take a look at the fun we had, well some of it was fun you can watch the movie and decide for yourself.


For a more detailed account of the adventure (the book version) see Patrick’s blog: Trail and Error

Oh one last thing, after the event, I must have still been distraught from that crazy effort to paddle through the wind tunnel, because I somehow deleted all the photo and video files off the adventure cam. Lucky for me I have a friend who is a technical genius and he was able to restore my files so that I could make this video. Thank You Jimmy!, I owe you one.

All in all, it really was a great day, even if I really suck at paddling.