They say it's good to come outside your 'comfort zone'.  In this race we were way outside the zone.  We also discovered right off that we were at a huge gear disadvantage.  I gotta get a smart phone.  The answer to so many of the clues could only be found by Google.  We made due with the phone-a-friend method.

We had a nice lady on the street take a pre-race picture of us. 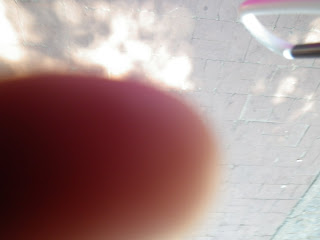 Which didn't work out so well.  So we found a second nice lady on the street to take a pre-race picture. 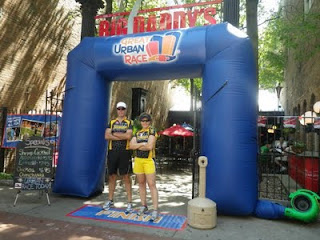 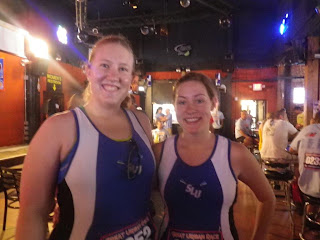 The clues were passed out to all the teams in envelopes which we tore open at the word Go! 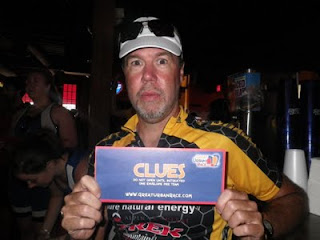 We figured out the first couple of clues on the sheet and then took off running, deciding to think about the rest while on the move. 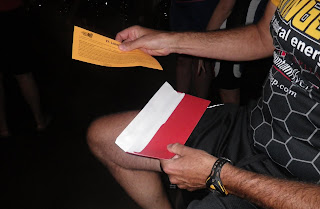 The first challenge we completed was forming a Conga line with 4 strangers.  I think they had more fun than we did, and even took our pictures for their facebook pages. 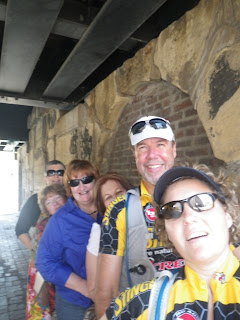 We talked to some waiters at an outdoor restaurant about one of the clues and decided we had to go to The Fudgery at Union Station. On the way there we completed the "picture of both teamates on a strangers bike".  Guess the guy figured we couldn't ride off with it, he had my camera for collateral. 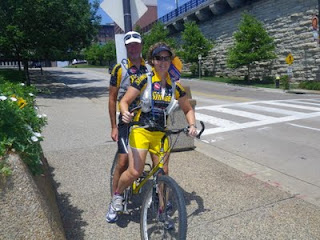 We stopped in front of Union Station to figure out some more clues.  Robin did phone a friend and landed us a few answers.  I called Lori and she got the work search answer.  In the couple of minutes this took we got to winess a fight that started in the park and moved into the street stopping traffic, then ended with some dude running away with an armful of clothes.  First time that's ever happened during a race.

So we ran the rest of the way into Union Station, so we could sing to the fudge guys.  Ok this video is so bad, but it cracks me up.  I have to put it in.  The fudge guy had a "WTF?" all over his face.

Teams had to feed each other a sample of fudge after singing.   I can't believe people pay for this mushy nasty stuff. 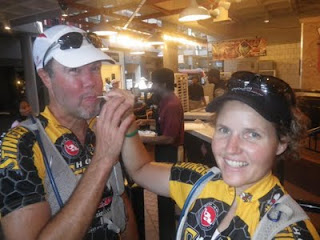 I don't know what to say about this one 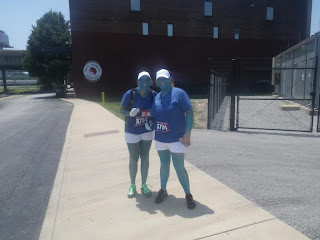 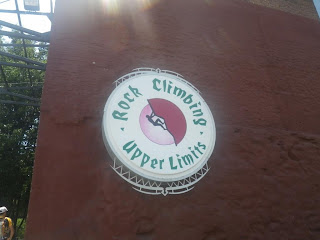 The big mistake of the day was the clue "make a donation to childrens hospital".  We were feeling pretty smart about getting toothbrush, toothpaste, and soap from the Hyatt hotel concierge for the donation.  We got tickets and rode the Metro out to the hospital only to find out that the donation FOR the hospital had to be dropped off at Office Depot, over 2 miles away.  We blew an hour by not carefully reading the clue.  We ran hard to make up the deficit.

After Office Depot another clue led us to the Moolah Theatre where we had to watch a film clip and write down it's name and leading actress. 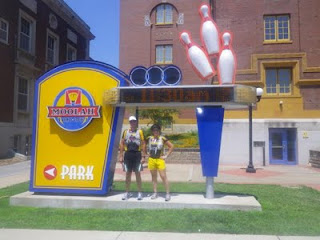 I talked to some students drinking beers at an outdoor cafe and we got sent straight to another clue on SLU campus, for a picture in front of their airplane display.  It was getting hot and humid, their beers were looking really good, I thought more than once about jumping over the wall and ordering one with them. 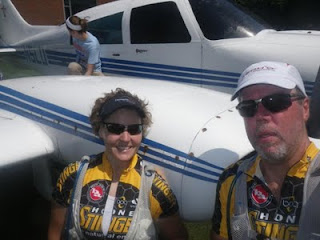 Next in line was the Fountain Restaurant.  It had same goofy looking art-deco interior paintings and we had to take a picture of a teamate doing one of the art-deco poses.  Robin got elected.  :) 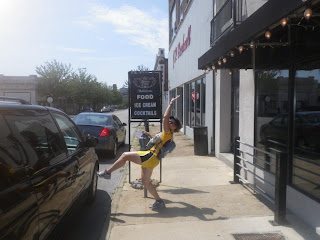 Our next challege had us meet a famous celebrity at a local hotspot.  Queen Latifah.  Thanks to Patrick or we never would have found the answer to this clue.  We were blocks away at the Fox Theatre. 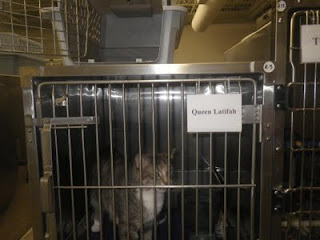 I wish I would have gotten pictures of the weedeater guy on the way to the last mystery checkpoint.  He was really bizarre, two weedeaters propped on this old bike with milk crates full of crap.  He was riding along yelling "Taxi!  Taxi!  Taxi!"  which turned into whistle blowing shortly after we ran past him.

The last checkpoint was Self Inflicted Tatoos.  Robin got some ink, and I got a picture of her afterward with her artist.  I think she is planning to go back for more. 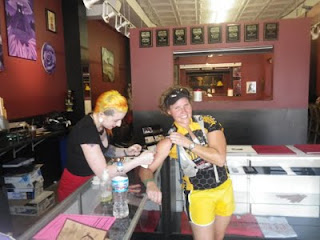 We ran in to the finish well ahead of the cut-off time so we had to hang out for awhile waiting for awards.  There was a two-person band playing on the patio. 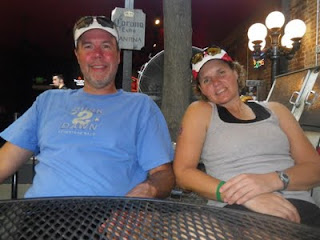 We got some cool looking medals and found out that we had finished high enough to get qualified for the Great Urban Race national championship race in New Orleans to be held this November. 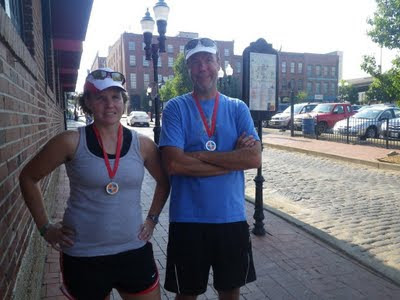