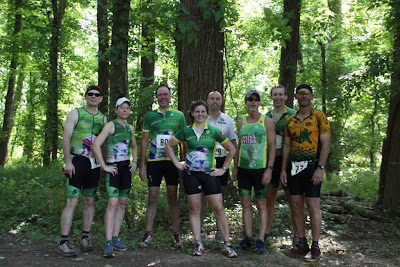 No paddling, can you believe that, stupid rain. I know what you’re thinking, every race report I have ever written says, I hate paddling and I do, but in a short race where the paddle is just a couple miles, I’m ok with it. I’m really ok with it when it comes at the beginning of the race and can be used for a nice warm-up that keeps my legs fresh for a fast mountain bike ride. 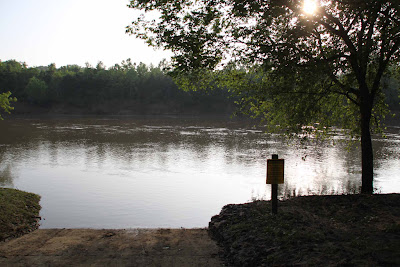 So at this years Conquer Castlewood race, there would be no paddle. The water was up and there was no beach to be found, so the paddle leg was cancelled. I was not at all happy with the circumstances and my teammate, Allan was not happy with the change either, but he is a super fast runner, so I didn’t think it would really make much of a difference to his time. Instead of starting the race paddling we would sprint a 1.5 mile loop, I call it a sprint not a run because that’s what it ends up being. The loop consisted of trail with sand and mud, at one point there were so many people that I was pushed over to the muddy side of the trail and ended up ankle deep in the mud. I kept running with mud and sand weighing my shoes down and my feet kept hitting slimy sections and sliding around. I had been running next to Chuck for the entire leg and then at the mile mark Chuck pulled away, and I chased him all the way to the bike transition. 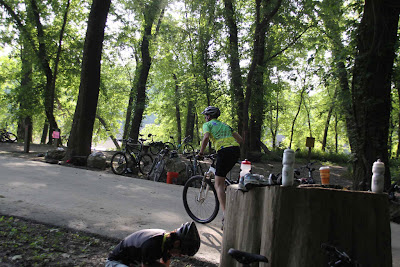 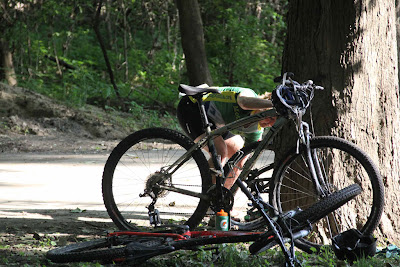 I was about 2 seconds behind Chuck at the start of the bike, but he quickly left me when we hit the field section. I really hate to say it, but he is stronger than I am. There Chuck write it down, you might not ever hear it again. Since the run was so fast, I was tired and the mountain bike leg just didn’t feel as good as it does coming off a paddle leg. After the loop around the big field I started to get my legs back and turn on the heat, passing a few guys, then my friend Mike passed me, he is always saying how he is slow, he is not slow, he flew past me. The problem was we both got to the steep part of Grotpeter and there was a line of riders stopped and walking. There was no way to ride around them, so we both jumped off our bikes and ran up the hill, then hopped back on and took off. That is when Mike pulled away from me like I was standing still. I was still passing people but at the top of Grotpeter where the trail turns back into the woods next to the road, I caught 4 guys and we were on a narrow single track section, and I couldn’t get past them. I was riding way slower then I should have been, but there was no way around. I finally made it around the first 3, but was still behind one more guy and I didn’t get a chance to pass him until I was almost to the road crossing by the rangers station. I don’t know how much time that cost me, but if I had to guess it was at least 3 minutes. So I turned the heat up again and bombed the rest of the loop into transition. I was in and out of transition in 25 seconds and running back down the trail to the section that was filled with sand and mud. This time there were a lot less people so I could pick a better line. I passed Mike in the sandy section, I think his smoking fast bike time, might have taken a toll on is legs, he looked good, but said he was slowing down. I kept pushing thinking maybe I could catch Chuck, but it never happened. I gave the race my all, but my time wasn’t what I wanted it to be. I really need to get in better shape. 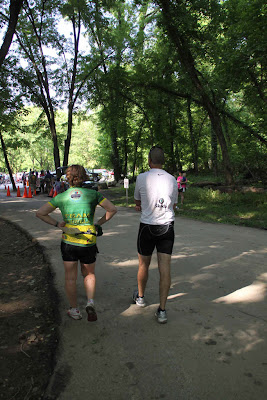 Still I had fun and my partner Allan smoked both runs and the bike, I just don’t know how he does it. Allan, I promise next year I will be in better shape. 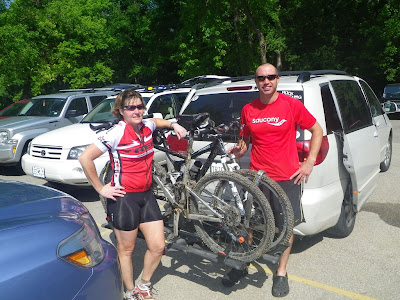 Chuck and Megan had a great race too, Megan is my stand in on the Rock Racing team. 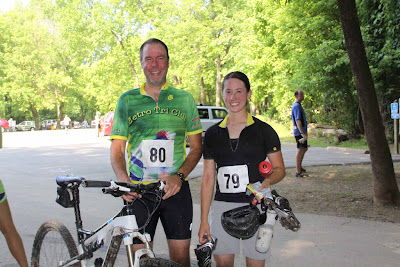 Allan and I were in the first wave of the race so after we finished there were lots of racers still out, including my friend Kate. Another friend, Keith and I headed out on our bikes to cheer on our teammate Kate, she had started in the second wave and was running the last half mile to the finish so we rode with her into the finish. This was her first Conquer Castlewood and she was really having a great time doing it. She crossed the finish line with a smile on her face and another great accomplishment under her belt. 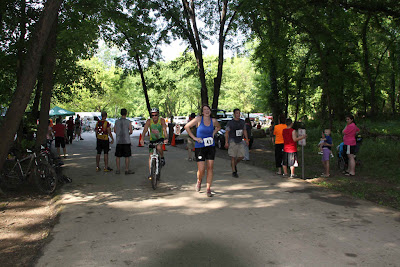 This is such a fun race, that I encourage everyone to do it and after the race when you know everyone, it’s like one big fitness party. It’s one of those places that you can stand around, sweaty, muddy, bloody and stinky and everyone around you thinks it’s just normal. 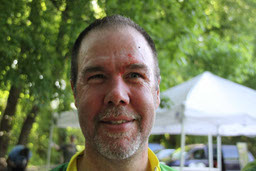 Chuck's Bloody Eye
Ballwin Parks and Recreation, you put on an awesome race!

To read Kate’s account of the race, check out the Super Kate blog.

And a big THANKS to Lori for taking all the great pictures, it’s so nice to have a photographer follow us around and document all our adventures.