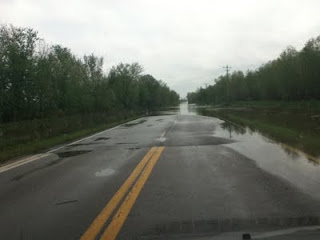 ROCK Racing had a paddle day planned for 4/23,  taking the Cuivre River to a takeout at Dardenne Creek on the Mississippi.  Unfortunatly the weather had another idea.  A solid week of rain/wind/hail and even tornadoes flooded all the roads leading to the takeout spot.

So we had to activate plan B. Which was an upstream paddle on the Cuivre from Old Monroe to the State Park.  National Weather Service had all  kinds of dire warnings for us, like this one:

THE FLOOD WARNING CONTINUES FOR THE CUIVRE RIVER AT OLD MONROE UNTIL FURTHER NOTICE. * AT 7 AM SATURDAY THE STAGE WAS 26.0 FEET. * FLOOD STAGE IS 24.0 FEET. * FORECAST... THE RIVER WILL RISE TO NEAR 28.5 FEET TOMORROW AFTERNOON. * IMPACT... AT 28.1 FEET... DYER ROAD UPSTREAM FROM THE GAGE BEGINS FLOODING JUST DOWNSTREAM OF THE NEW HIGHWAY 79 BRIDGE. * IMPACT... AT 27.0 FEET... RIGHT BANK OVERFLOWS.

One of our paddlers Aaron, was flying in from Dallas.  Lambert Airport got hit by a tornado last night and was completly closed to air traffic.  Aaron got sent back to Dallas, after spending the night in KC.  That had to suck.
I turned the news on for a few minutes before Patrick arrived and heard all kinds of doom and gloom, thunderstorms coming all day long.  The news people will have fun trying to scare people with this for days.

Patrick showed up, we loaded the adventure van, and drove to the river.  We got there and looked at the water rushing past at what looked like 10 mph, and knew we'd never make the 25 miles to the State Park.  But we figured we would at least get in a good workout, even if we had to give up on our mileage goal.
Patrick paddles a 14ft Old Town Nantucket, mine is a 17ft Perception Eclipse.  Both of us use camelbaks strapped on the top deck for gear, food, and water.  Here are the 'yaks ready to be loaded with gear: 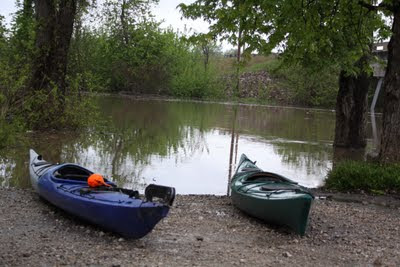 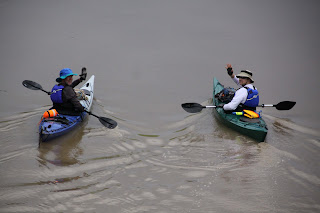 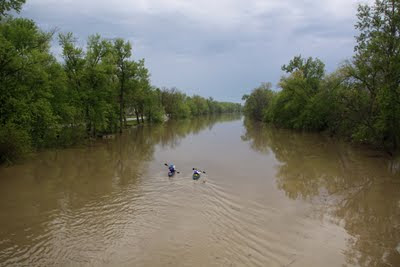 We weren't in the water 15 minutes before it started to rain.  Rain is fine as long as the lightning stays away.

The biggest challenge was dodging the piles of logs washing downriver.  We were steering from one side of the river to the other almost constantly dodging: 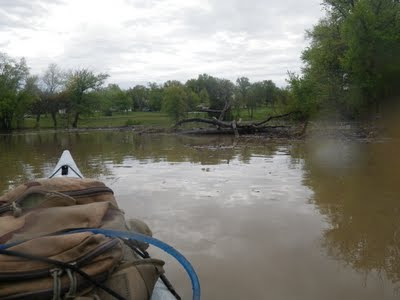 We did score a good toy: 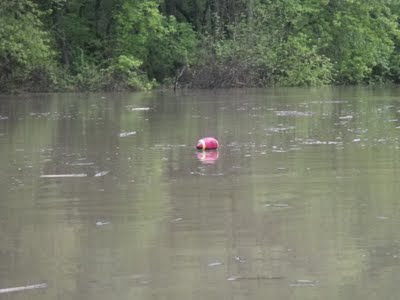 Anyone who reads this blog knows I like taking pictures of strange things we spot in the woods.  So here's an old school bus parked in a field.  Its gotta be old, look at the curved back end on it: 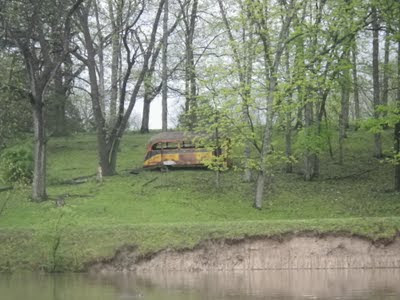 Not long after the bus Patrick asked if I seen the lightning.  I didn't.  But only a few padlde strokes later it was unmistakable.  We got caught by a fast moving thunderstorm.  They say the worst place to be in a lightning storm is on the water, so we pulled up in a creek and pulled on rain gear to wait it out.  The wind picked up and rain poured.  Thunder and lightning all around.


When the thunder stopped we decided to call it a day and head back to the put-in spot before we got caught by another thunderstorm.  As soon as we cut back in to the current, it was amazing, after all that upstream paddling, we were finally going FAST.  With the wind and current pushing, we barely had to paddle.

It took a little while until we got back in cellphone range so I called Lori to bring the adventure van for a pick-up.  Of course it quit raining about the same time we got out of the water.  As we were loading gear both of us were saying how great the Stohlquist PFD's worked out.  Hardly even noticed I was wearing it.

So we got in a three hour paddle.  Much shorter than we had originally planned, but better than nothing.