ROCK Racing teammates (Robin, Chuck, Patrick) have entered the Double-Chubb 50K trail race this year, so we have been building up our trail running mileage.  Long run days are always more fun with a group, so we organized a run for 1/23.  The plan (made on a snow free, 35 degree day) was to run the 8.3m Lewis and Clark trail followed up with the Lost Valley 13m trail, connected by a short piece of road, making a nice 22m run.  The 9 inches of snow already on the ground and a forecast of 5 more coming that afternoon caused us to reconsider the plan.  We decided on doing 2 laps of Lewis and Clark, one each direction.  We planned an early start so I got all my gear ready the night before, and made it to the trailhead right before our 7am start time, just as it was getting light.
. 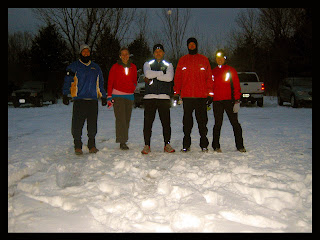 We had a group of 5 (Robin, Chuck, Patrick, Mike, and Nicole) that headed out into the crunchy snow.  Luckily we found that other runner and hikers had been out since the snow had fallen so we had a nice packed path to follow. 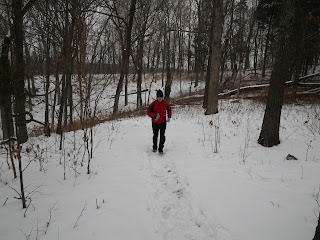 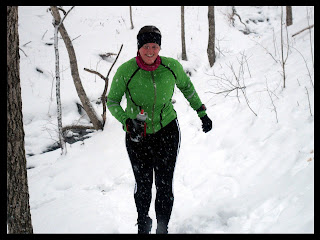 Almost right off we seen a grey fox run across our path.  He was way too fast to get a picture of, but he did cause us to start talking about the recent confirmed sighting of a mountain lion in our area.  I think it ended up with me being the only one that wants to see one in the wild.
Lewis & Clark is a great trail, 100% singletrack, lots of rocks and roots, lots of elevation change, and most people only seem to come out for the short loop, so once you get into the back section you hardly see any other people. 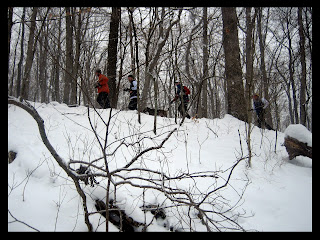 We stopped a few times along the trail to re-group, drink , and get a few pictures. 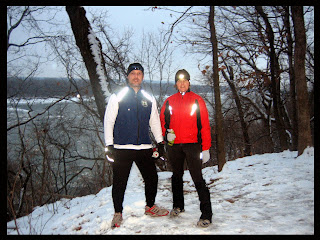 When the first lap was done, Mike and Nicole dropped off and we picked up Doug, Mike, Val and Zilla for the second lap.   I took some time to refuel on a package of Honey Stinger chews, and I think I even convinced Val that they are superior in all ways to the Chomp-things she brought along.  Patrick and Val put on some Yaktrax for extra traction.  They looked like springs with straps to go over your feet.  My Inov8 Roclite 312’s were gripping the snow so great I didn’t need any extra traction. 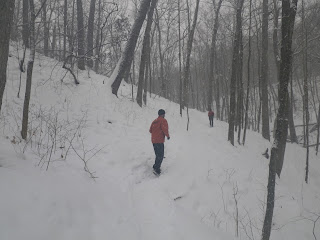 It started snowing pretty hard at the beginning of the second loop and I was wishing I would have worn a hat with a visor to keep snow out of my eyes.  We were having a great time cracking jokes and goofing off this time around.  We got a few pictures of us playing around: 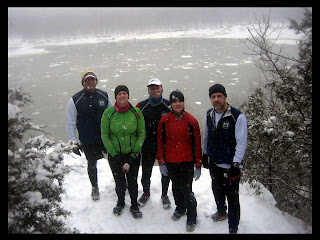 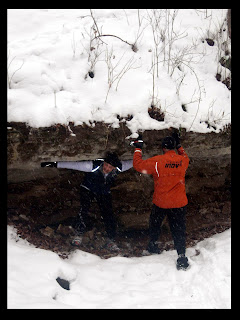 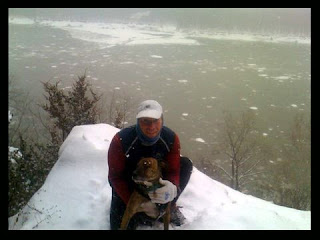 And a few scenic shots. 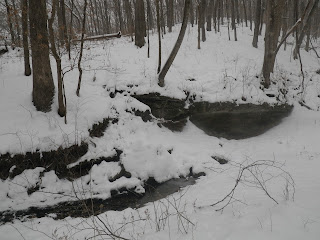 And a group pic. 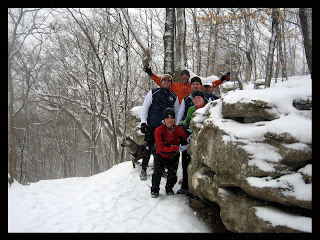 So when we got back to the parking lot with a 6 minute negative split on the second lap we were really surprised.  In the end even though we finished a few miles short of our original plan, we figured the extra effort caused by the snow made up the difference.