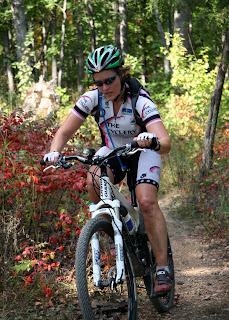 As late August arrived, so did the annual Berryman Off-Road Duathlon. I’m not sure why they call it a duathlon because really it is a biathlon, run/bike. I’m all excited because this is the first year I will attempt to complete the 12 hour race. The race is about 2.5 hours from my house and starts at 7 am, so I have to leave extra early to drive to the race start. This is where all the excitement began.

I was about half way to the start when my van had a blow out on the rear driver side wheel. Its dark I’m on a busy 8 lane highway, and I have never changed a tire. I call my teammate who is meeting me at the race to tell him I will be late and catch him somewhere on the course, he says he is at an intersection where he can get on the highway I’m on and come help me. So I get out my handy headlamp and put it on, drive the van to somewhat of a shoulder, get out the owners manual and figure out how to change the tire. 45 minutes later Chuck calls to say I’m almost to where you are, I told him the tire was changed and to flash his lights and I would follow him when he drove by. We got back on the road and had to stop at the first service station to put air in the tire. Finally back on the road and driving way to fast, we make it to the race 3 minutes before the start.

I run to registration tell them the sad story of a flat and tell them me and my teammate will be starting the race late, it’s a 12 hour race, what’s a few minutes. I pulled my bike out of the van and also threw the destroyed tire out on the ground since it was making the van smell like burned rubber. I grabbed my water bottles and SIDI’s and header to the starting line with Chuck in tow. This is an individual race, but Chuck and I thought it would be fun to do together, so we planned on staying together for the entire race. I dropped my SIDIs in transition and started the run exactly 18 minutes after the actual start. Finishing the first 5 mile run on tough single track was great and it gave me time to calm my nerves from the hasty start. I quickly changed into my beloved SIDI mountain bike shoes, they are bright red, my favorite color. We hopped on the bikes and headed out for one the of toughest single track loops in the Midwest, 13 miles of hills, ruts, roots, monkey heads and gravel. Life just doesn’t get better then this. We start passing people and have started to take back some time. We hit transition calculating how many girls are in front of me based on how many we saw at the start and how many I passed. I’m still pretty low in the rankings, but hanging in. Another run lap, followed by a bike lap, my SIDI’s fit like a glove and while my teammate is feeling some foot pain from his brand of shoe, I am not. We make transition for the third time and realize I have moved up to second place, but the third place girl we only passed minutes earlier, so we swiftly took off for what would total 15 miles of running, we are starting to tire, but I just keep thinking that if we finish the third bike lap which will give us a total of 39 miles, we may not have to do a forth if we can finish before the cutoff time and the 3rd place girl doesn’t make the cutoff. Just as we hit a gravel road which leads us into transition about 1.5 miles up the road, Chuck stops in the road in front of me and is yelling something that I can’t hear, as I fly down the road and am about to reach Chuck I look down and there is a 8 foot rattlesnake in the road, and he is just looking at me. I wondered if a rattlesnake could bite through a pair of leather SIDIs. I fly by Chuck and yell lets get out of here. I later found out that a rattlesnake can strike up to two times it’s body length, and I couldn’t have been more than 3 feet from it. It gave me chills. So we make it to transition without incident and find that I am in second place, and the girl in 3rd is probably only 10 minutes behind me. I have to make a choice, go out again or wait and hope she doesn’t make it to transition before the cutoff, which was 30 minutes away. I’m hot and tired, it’s in the 90’s and I really don’t want to go, but this stupid competitiveness I have, forces me to go. We take it really easy on the run, even walking some, then we see a guy out for a run and he says he saw the girl and she was not far behind, back to a hard run, into transition, put on my SIDIs for the last time and head out to finish a 4th lap totaling 52 miles of mountain biking. We come around the corner into the finish I look at my watch and this lap was my second fasted lap of the day. I take a drink, high five Chuck and turn around to see the 3rd place girl finishing only 2 minutes behind me. I could barely get my leg over the crossbar of my bike to shake her hand and I was dreaming about a shower and food. I changed clothes and cleaned up as much as I could with baby wipes, then ate everything I saw. My SIDIs were covered with mud and dirt, you couldn’t even tell that they were red, but they told the story of a good time had by all and a race I will never forget.